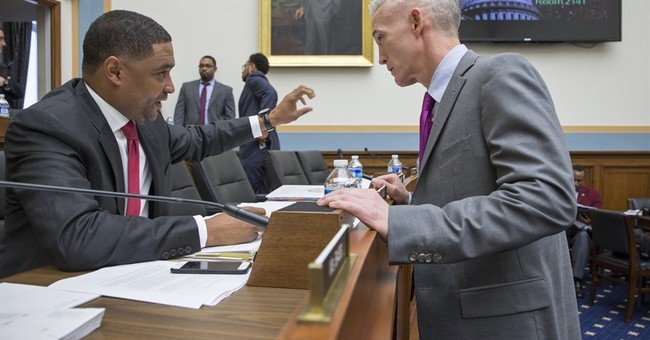 “As recently as this afternoon, I offered Mr. Cummings total, unfettered access to, and control of, transcripts if he simply agreed he would not selectively leak them," Gowdy said in a statement Wednesday. "He would not give me that assurance. Democrats have threatened to leak more transcripts and therefore I have no choice but to protect past witnesses, future witnesses, confidential material and the integrity of the investigation by allowing the Democrats equitable access but not control. Once they stated their intention to misuse transcripts, I could not in good faith allow them to do so. Mr. Cummings likes to frequently lecture people how 'we're better than this,' but his actions and the actions of his staff with regards to this investigation unfortunately prove otherwise. That is why I have taken these reasonable steps in accordance with House rules to provide equitable access to witness transcripts while protecting the integrity of this investigation.”

To prove to the Democrats he means business, Gowdy sent a letter to Cummings with his plans, listing several reasons why he had to take such measures. For one, Democrats "selectively released an unverified, unofficial and draft version of the transcript of the Committee’s interview of Cheryl Mills" without authorization. This type of behavior prevents the committee from running a "fact-centered" investigation, Gowdy said.

Since the beginning stages of the committee's effort, Democrats like Elijah Cummings have accused their Republican colleagues of using the committee to ensure Hillary Clinton does not become president next year. Gowdy has refuted that accusation, noting that Clinton accounts for only one witness in the larger investigation into what happened in Benghazi, Libya on September 11, 2012. As one of the "secret soldiers" of Benghazi noted, this committee is the only one that is questioning everyone involved.

For the victims' families' sake, let's hope the Democrats comply with the new rules.