Rubio Confident The Polls Are Wrong in Florida 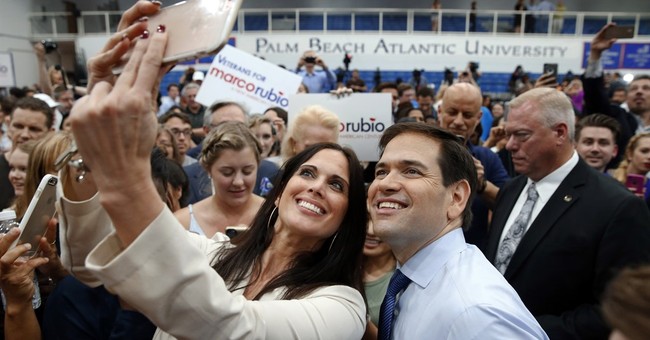 For days, polls out of Florida have shown Sen. Marco Rubio (R-FL) trailing Donald Trump, in some cases even by double digits. Trump is ahead of Rubio by nearly 20 points, according to the most recent RealClearPolitics average. On Fox News Tuesday morning, Rubio indicated that those numbers were a bunch of bologna. After tonight’s votes are tallied, he indicated that he’s going to have the last laugh.

"Quite frankly, I think a lot of people are going to be embarrassed tonight and are going to want refunds from the money they spent on those polls because we're going to win Florida," Rubio said. "We feel very optimistic about that."

Rubio has been campaigning all over the Sunshine State hoping to prove the media wrong. One of his new ads contrasts him with the frontrunner, condemning Trump’s offensive rhetoric.

In addition to the polls in Florida, a new national survey does not bode well for the senator. An NBC News/SurveyMonkey poll shows that he dropped 7 points in the past week, putting him in fourth and last place.

While the polls do not back up the senator's strong debate performance last week, perhaps the voters will pull off a shock like they did in Iowa, where Rubio landed in a surprisingly strong third place.