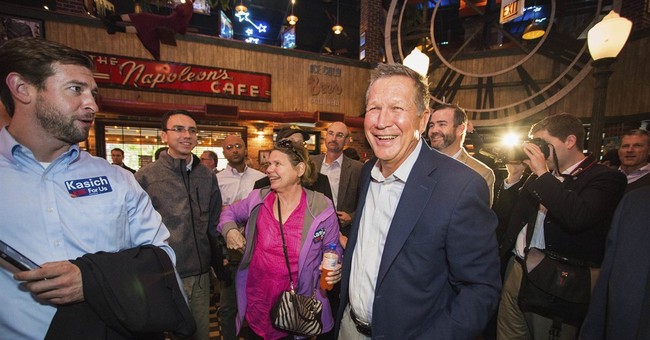 For the first time this election season, we witnessed a (for lack of a better word) boring GOP debate Thursday night on CNN. Trump kept the insults to a minimum as the four remaining contenders largely engaged in a substantive policy debate. That is in part thanks to the moderators’ line of questioning, which unlike former debates did not seek to stir hostility on stage.

Trump and Cruz lead with the most primary victories and clearest paths to the nomination – and that’s bad news for the Republican establishment.

Donald Trump: Former presidential candidate Ben Carson officially endorsed the businessman Friday morning, noting Trump has the “guts and energy” needed to be president. The announcement came as a surprise to some, considering Trump called Carson “pathological” on the campaign trail this fall. In other news, Trump denied allegations that his campaign manager Corey Lewandowski grabbed Breitbart News reporter Michelle Fields during a press conference this week, bruising her arm. Fields responded by filing a criminal complaint against Lewandowski on Friday.

Ted Cruz: Cruz’s debate performance Thursday night resonated especially well with conservatives, particularly when he explained the need for limited government. Because Cruz is the closest rival in terms of primaries and delegates, many consider him the best alternative to Trump.

Marco Rubio: In an interesting campaign move, Rubio spokesman Alex Conant is telling supporters to vote for John Kasich in Ohio. That, he indicated, is a surefire way to stop Trump from taking the key swing state. Kasich’s team, however, has rejected Rubio’s plan, noting they don’t need his help to claim victory on the governor's home turf. Rubio delivered a strong debate performance in Miami Thursday night, beating Trump in terms of depth of policy. Yet, as The New York Times notes, it probably came too late. On Friday, the Florida senator denounced Trump’s “neutral” position on the hostility between Israelis and Palestinians. To offer a clear contrast, Rubio noted he would tear up the Iran nuclear deal and restore trust in the U.S.-Israel relationship.

John Kasich: As noted above, Kasich’s team is confident they are well on their way to a win in the governor’s home state of Ohio. Recent polls appear to be on his side. This Fox News poll, for instance, has Kasich up 34 percent to Trump’s 29.

Bernie Sanders and Hillary Clinton both have new ads out on Friday. Clinton’s “Mothers of the Movement” spot features women who have been the victims of gun violence, noting how they trust Clinton to enact “common-sense” gun reforms. Meanwhile, Sanders is targeting Clinton’s waffling on trade deals in his new campaign ads. In the way of endorsements, Clinton got some serious Hollywood clout after TV producer Shonda Rhimes appeared in an ad with several of her series’ stars pledging “I’m with Hillary.” Sanders isn’t exactly lacking in support, though. Thousands of fans have been following the passionate progressive to his rallies in Florida.