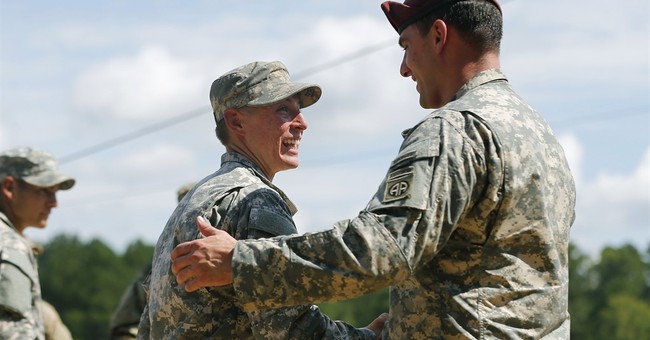 That’s the concern voiced by Megan MacKenzie, author of “Beyond the Band of Brothers: the US Military and the Myth that Women Can’t Fight.”

“They feel what makes them special is being all male, and somehow integrating women is going to make them less special and less adept.”

Earlier this month, the Pentagon announced it was opening all U.S. military combat roles to women. While many praised the administration for this equal opportunity for women who want to serve our country, others were not so sure it was a great idea. A survey of special operation forces released shortly after the announcement revealed that a sizable majority, 85.6 percent, opposed the move. Their reasoning ranged from lower standards, to the threatening of male camaraderie:

The focus group responses show concern about lower standards, unit morale, political motives and accusations of sexual assault, among other issues. The 292-page study includes statements of vehement opposition from across the military’s branches.

“It’s a slap in the face telling us that chicks can do our job,” one Army Ranger said.
“It’s not the physical aspect that bothers me. My issues are morale and retention. This wouldn’t be special to anyone anymore.”

Their hesitations about women in combat are shared by some members of Congress. Rep. Duncan Hunter (R-CA), for one, warned that allowing women to all military occupations means they would be potentially required to sign up for future drafts:

“If this goes through, it’s going to be mandated that women be drafted,” said Rep. Duncan Hunter of California, a Marine Corps veteran who served in Iraq and Afghanistan — and who maintains that women should still be barred from some combat roles. “If you’re going to have women in infantry units, if a draft ever occurred, America needs to realize that its daughters and sisters would be included."

Overturning the ban on women from certain combat roles was one of a few major changes to our military since President Obama has taken office. A few years ago, he repealed the Don’t Ask, Don’t Tell policy that prohibited gays and lesbians from serving openly in the military.

No matter what policies are implemented or reversed, I think we can agree that any American who wants to serve his or her country deserves our admiration.