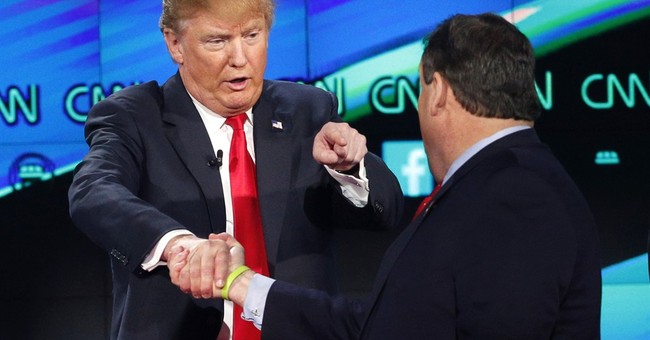 Hoping to slow down Gov. Chris Christie’s momentum in New Hampshire, GOP presidential frontrunner Donald Trump reminded voters at a campaign event in Nashua about Christie’s cozy relationship with Obama he was all too happy to exhibit three years ago. Conservatives were frustrated when Christie openly embraced the president when he visited New Jersey in the aftermath of Hurricane Sandy and praised him for his “outstanding” efforts. His visible and vocal admiration of the president came just days before the 2012 election.

"I don't call it a hug. I call it a hug mentally," Trump jabbed at Christie's photographed embrace of Obama shortly after Hurricane Sandy. "It was unbelievable. He was like a little boy: 'Oh, I'm with the president,'."

But, Trump didn’t just target Christie’s infamous hug. He also told his supporters that the governor is overseeing a miserable economy.

“The taxes are through the roof,” he said.

Trump’s ramped up criticism of the New Jersey governor comes after New Hampshire’s biggest newspaper gave Christie their endorsement and he continues to surge in the state’s polls.

Don’t think the editor of the New Hampsire Union Leader was safe from Trump’s vitriol. He’s a “lowlife,” the businessman said.

The CDC is Changing Their Guidelines on Vaccines and Masking...Again
Katie Pavlich
Don Lemon: These Should Be the Punishments for People Who Refuse the COVID Vaccine
Julio Rosas