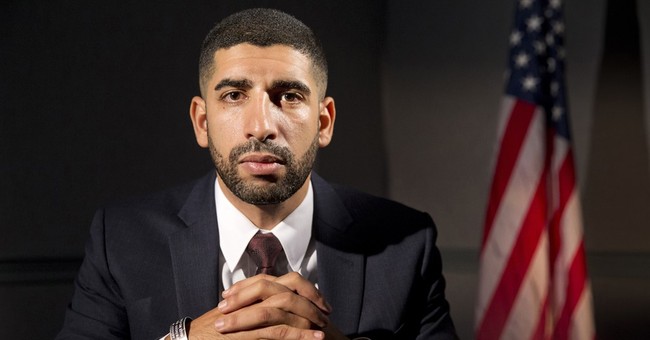 President Obama awarded the Medal of Honor to one of our nation's heroes Thursday morning, a fitting follow up to Veterans Day.

Army Captain Florent Groberg was an accomplished track and field athlete at the University of Maryland. After joining the army and being deployed to Afghanistan in 2009 and 2012, his running skills were put to the test in ways he couldn't have imagined.

The president provided a quick recount of Groberg's incredible bravery. One day in August 2012, he explained, Groberg was leading a group of soldiers on a routine walk to a meeting with local Afghans. As they were heading toward a bridge, a pair of motorcycles sped toward them. They were a diversion. While his comrades were distracted by the cyclists, Groberg noticed a man in dark clothing spin around with something hidden under his vest. It was a suicide bomber. Instinct kicked in and Groberg sprinted toward the bomber, grabbed him by his vest and pushed him away from his fellow soldiers.

"He had the instinct and courage to do what was needed," Obama said.

Sadly, the bomb was triggered and the blast threw Groberg about 20 feet in the air, knocking him unconscious. When he awoke, he discovered four of his comrades had died. By pushing the terrorist away, however, Groberg minimized the damage that could have been done because the explosion occurred further away from the soldiers rather than hitting them directly. Moreover, Groberg thwarted a second bomb blast.

"Had both bombs gone off as planned, who knows how many could have been killed," the president remarked.

Groberg spent three years recovering from his sustained injuries, including a broken leg. He doesn't run much anymore, but that hasn't stopped him from enjoying an active lifestyle.

"He’s not running, but he’s doing a lot of CrossFit," Obama said. "I would not challenge him to CrossFit."

Groberg's story proves that our veterans deserve more than just one day of recognition.