Author: The Real Watergate Scandal Was the ‘Trashing of Our Constitution’ 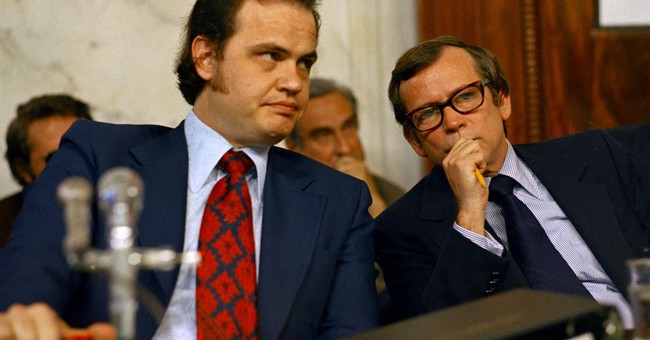 Richard Nixon has been tarnished in the minds of many Americans, his name forever tethered to that infamous scandal known as “Watergate.” One author, however, is on a mission to exonerate the 37th president from the ordeal, and the trial that resulted in his resignation. In his new book, The Real Watergate Scandal: Collusion, Conspiracy, and the Plot that Brought Nixon Down, Geoff Shepard, who worked on Nixon's defense team, offers never-before-seen evidence behind what he says was a detailed plot to evict him from office.

“Time and time again, document and document, it unwinds Watergate,” Shepard told Townhall. “I think of the book as Watergate’s Watergate. That the real scandal was the trashing of our Constitution and our Bill of Rights in the successful effort to drag Nixon from office to realign political power.”

Shepard dedicates several pages of his book talking about collusion. Collusion between the presiding judge in the Watergate trial, John Sirica, and the prosecution:

“John Sirica is a disgrace to the federal judiciary,” Shepard said. “What he did – and it’s documented in the book – at least a dozen instances of secret meetings between that judge and Watergate prosecutors and other interesting people. You don’t have to be a lawyer to understand the judge isn’t supposed to get together with one side before the trial and work stuff out. And Sirica did it all the time.”

Collusion between the prosecution and congressional officials:

“The special prosecutor was secretly assuring court and congressional officials that Nixon had personally approved to pay another blackmail,” he said. “They were wrong. They couldn’t prove that. Turns out to be the opposite. But we didn’t know (those of us on President Nixon’s defense team) they were making this secret accusation. If Nixon had known that’s what they were saying about him he never would have resigned. Nixon wasn’t a quitter and he knew he hadn’t done that. But we didn’t even know about the accusation.”

And the concealment of significant documents:

“Watergate prosecutors took the government files with them,” Shepard explained. “This is not unlike having a private server and deciding later how many documents you’re going to destroy. These are government documents and they should have stayed at National Archives and then subject to review with researchers like me. But three of the key prosecutors took their files.”

So, why such a group effort to bring down the president?

Shepard said the left’s disdain for Nixon began when he was a congressman in the 1940s and brought down Soviet spy Alger Hiss, who was regarded as a leftist hero. Since then, the author explained, the liberal elite has considered him a target.

“And what happened in Watergate if you look at it in retrospect, the eastern liberal elites got control of the special prosecutor’s office, and they had a power to prosecute,” Shepard said. “They criminalized prosecution. They staffed the place with all of their friends.”

The author is hoping, however, that his book will work to reverse Nixon's tainted reputation.

“My conclusion at the end of the book is that we have to stop this,” he said. “The GOP have got to learn what’s happening to them and stand up and say this isn’t going to happen again. We’re going to go back-old topic, brand new disclosures, and study and learn what they did. And there has to be a court ordered investigation. There are people still around that participated in the secret meetings with the judge.”

You can read more of Shepard’s research on Watergate and the “real” scandal at www.geoffshepard.com and find out why he wholeheartedly believes the following:

“We were robbed of a great president.”