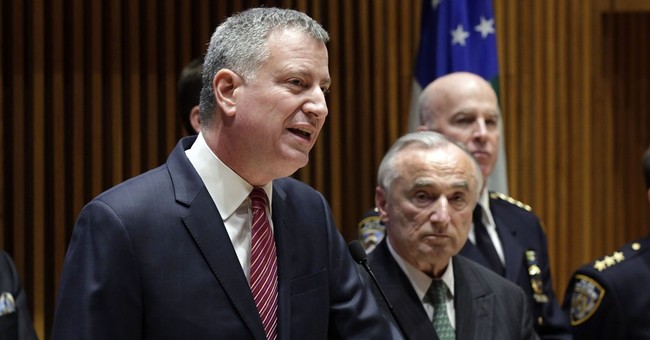 Straight from the mayor’s office:

Echoing Gov. Andrew Cuomo’s (D-NY) infamous remarks from last year, where he more or less told conservatives they were not welcome in their own state, New York City Mayor Bill De Blasio insisted Styrofoam products have ‘no place’ in his city.

What, may I ask, does belong in New York?

The mayor is targeting Styrofoam because, he asserts, it is harmful to the environment:

"These products cause real environmental harm and have no place in New York City," said de Blasio in a statement announcing the ban on Thursday. "We have better options, better alternatives, and if more cities across the country follow our lead and institute similar bans, those alternatives will soon become more plentiful and will cost less."

His new effort may please radical environmentalists, but it will anger just about everyone else. Right on cue, restaurant vendors have condemned the mayor’s announcement, which will inevitably harm their businesses and profits:

However, restaurants worry that the ban will stick them with higher operating costs as they scramble for an alternative material.

The Restaurant Action Alliance, a lobbying group, condemned the decision, suggesting that it would increase costs for eateries while saying that the city should instead focus on creating a plan to recycle the material.

These businesses shouldn’t be too worried, however. De Blasio’s war on Styrofoam is likely to join his other failed missions, which included banning horse drawn carriages ("animal rights"), and the sale of large sugary drinks ("health").

It’s amazing how De Blasio can champion such irrelevant causes like these as he is facing criticism for his handling of race relations in New York, which has turned deadly. Two NYPD officers were killed last month following protests over the killings of Michael Brown and Eric Garner. De Blasio did nothing to help ease the tension between citizens and the police, even having the audacity to insist that the police were responsible for causing “distrust” in local communities. As a result, the NYPD has literally turned its back on him multiple times.

But, by all means mayor, go ahead with your Styrofoam agenda.