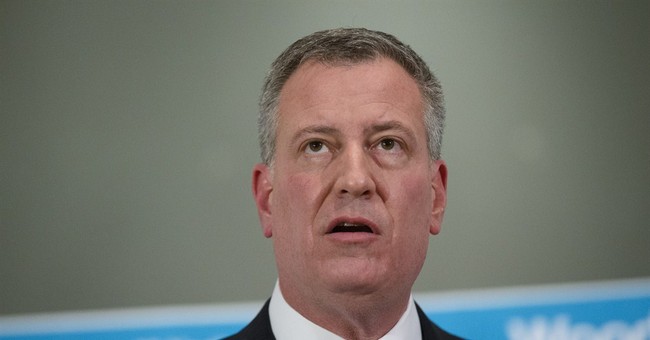 Shortly after the horrific murders of NYPD police officers in Brooklyn yesterday, New York City Mayor De Blasio did not receive a warm welcome when he entered Woodhull Hospital for a press conference. NYPD police officers in the room turned their backs on the mayor and Police Commissioner Bill Bratton as they walked into the room.

As a reminder, De Blasio recently slammed the New York police to the media, essentially called them racists and accused them of being responsible for the "distrust" in local communities. UPDATE: He also explained to the press how he warned and "trained" his son to be afraid of police.

Police unions, which have been angry for weeks, are accusing De Blasio of having "blood on his hands"  for the recent slayings.

A written message from Edward Mullins, president of the Sergeants Benevolent Association, addressed the mayor directly. “Mayor de Blasio,” it read in part, “the blood of these two officers is clearly on your hands.”


Naturally, after police refused to face De Blasio as he entered the room, his press secretary lashed out and accused officers of "irresponsible" behavior.

Asked on Saturday about the turned backs and union messages, Phil Walzak, the mayor’s press secretary, said it was “unfortunate that in a time of great tragedy, some would resort to irresponsible, overheated rhetoric that angers and divides people.”


De Blasio didn't speak for long at the press conference last night and deferred to Commissioner Bratton, but not before saying "We're all in this together," which was met with the response, "No we're not" by an officer in the room.

“We’re all in this together,” the mayor told grieving cops. “No we’re not,” one officer said tersely in response." http://t.co/K4TD4ReeVK