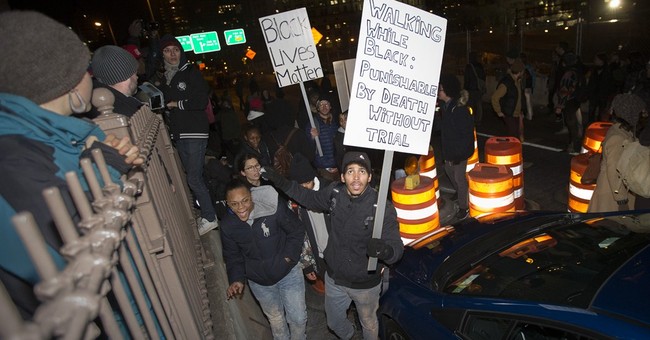 It is over two weeks ago now that a grand jury in New York decided not to indict the officer who killed Eric Garner in a chokehold, yet protesters are still making themselves at home on our nation's freeways and bridges. This time, they took over Manhattan Bridge. The New York Times has the details:

The Office of Emergency Management took to Twitter to urge drivers to use alternate routes.

Pictures and videos posted to social media show protesters on the bridge who had turned out for separate rallies, one supporting police officers and one and another protesting recent grand jury decisions not to indict officers involved in the deaths of unarmed blacks.

That so called pro-cop protest featured a paltry showing, the majority of people swarming the bridge being angry chanters.

In recent weeks, protesters of Garner's case have been ranting against 'police brutality' on our nation's infrastructure, blocking traffic and/or shutting down bridges entirely. The 11th Street Bridge in Washington, DC, and New York's Brooklyn Bridge and Verrazano–Narrows Bridge, to name a few.

I think anyone would agree that Mr. Garner did not deserve to die, and that the way he did die was tragic. But, what does blocking traffic accomplish? How does shouting at cars on the road honor the man these protesters are supposedly trying to defend? It doesn't. It just makes for a lot of frustrated commuters and a lot of concerned bystanders just trying to enjoy their Friday night.

Put down the signs, and pick up some common sense.