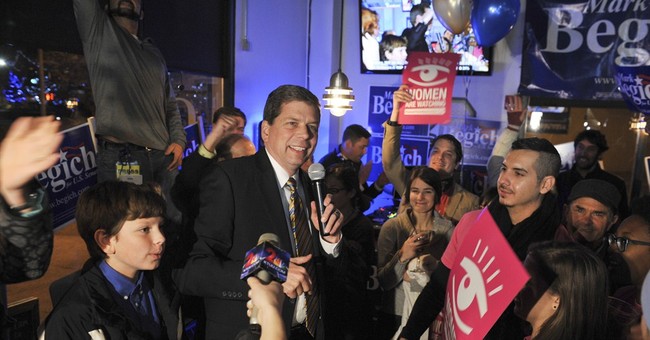 Republican Dan Sullivan won the Alaska Senate race last week, according to the Associated Press. Yet, one person who refused to accept this reality, was Senator Mark Begich (D-AK). That is, until Monday. Sullivan held a tight, yet solid 8,000-vote lead over the incumbent, but Begich insisted votes yet to be counted might give him the edge. He has officially conceded, however, that that lead just doesn't exist.

Here is part of his concession statement:

"During this campaign, I put my record of delivering for Alaska front and center, and it's why this election was one of the closest races in the country despite over ten million dollars of attacks from Outside groups and their partisan narrative. These accomplishments are not red or blue results, they're Alaska results, and the final margin of this election and the clear support I received from independent voters affirms that.

"When I spoke with Dan Sullivan today, I encouraged him to adopt a bipartisan resolve in the Senate. Alaska is ill-served by the partisan fights that don't reflect our state's unique needs and priorities.

"Rural Alaska made its voice heard loud and clear in the election, and I am overwhelmed by the record levels of support I received from villages and hubs across the state. It has been an honor to travel Alaska to meet with Alaskans in their homes, tribal halls and businesses to hear their needs and concerns. Being born and raised in Anchorage, I'm also proud to have won ten of Anchorage's sixteen legislative districts, a testament to my past and present service to my community."

Sullivan's statement was just as gracious as he too kept Alaska as the focus:

“Earlier today I spoke with Senator Begich, who congratulated me on my election to serve Alaskans in the U.S. Senate,” said Sullivan. “I thanked Senator Begich for his service, and we agreed on the importance of a smooth transition process. The responsibility of representing and serving Alaskans comes first. I look forward to doing the job that Alaskans elected me to do, and to begin the process of turning our country around and building a brighter future for Alaska.”

Thus ends a long, competitive election in the Last Frontier. Now on to the last piece of the 2014 midterm puzzle: Louisiana.