Dr. Ben Carson: "I Will Continue to Defy the PC Police" 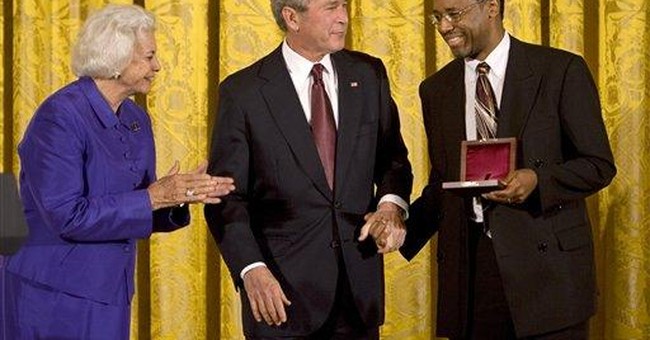 “America is a land of dreams,” Carson declared, before insisting this freedom is under attack by the bullies of political correctness.

“People are afraid to speak up for what they believe.”

The conservative doctor knows a thing or two about political correctness, as he himself has been lambasted for defending conservative principles such as traditional marriage and private health care. He refused to let these attacks stop his pursuit of the First Amendment.

“I will continue to defy the PC police. They try to shut me up. I find them pretty amusing. I still believe marriage is between a man and a woman.”

Last year, the media charged Carson with comparing gay marriage to bestiality. He said anyone who believes that is a “dummy” and he corrected their inaccurate assumption.

“Of course gay people deserve the same rights as everyone else, but they don’t get extra rights.”

The media published more unfair headlines when Carson declared Obamacare is “the worst thing since slavery.” In their analysis, the doctor had directly compared the two.

Carson likened these demonizing tactics to those found in community organizer Saul Alinsky’s Rules for Radicals. But, the doctor said conservatives need to “stop being intimidated” by these old, familiar strategies.

“It’s time for people to stand up and proclaim what they believe and stop being bullied.”

He offered a few specific solutions, including that of the nation’s health care system:

“Fight to make sure health care stays in their hands and not in the hands of the government.”

Carson didn’t say whether he’s joining the presidential race in 2016, but his passionate and bold speech certainly gave those wearing “Run Ben Run” reasons to smile.

Reporter Zeroes in on What to Look for Next As Cuomo's Campaign of Thuggery Against Press Is Exposed
Townhall
Deranged: Blue-checked, race-obsessed 'Bishop' Talbert Swan posts 'leaked photo of Candace Owens on her wedding night'
Twitchy
Foreign News Shows Are Now Raising Questions About Joe Biden's Cognitive Issues
Redstate
Biden's Latest Verbal Slip Might Be His Most Disturbing Yet
PJ Media