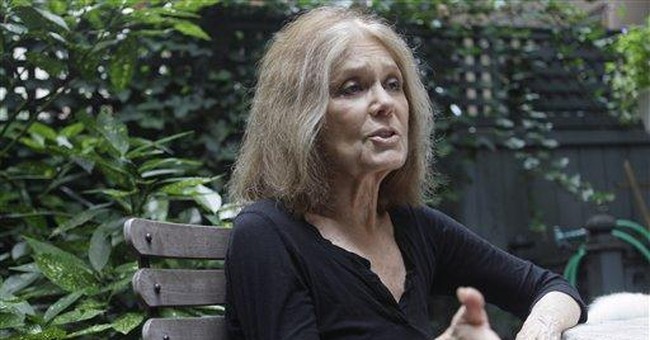 Feminist hero Gloria Steinem joined Joy Reid on her new MSNBC show The Reid Report Wednesday to do what she does best: shame men and insist we are fighting a “war on women.” This time, however, she came with “proof.”

The Women’s Media Center, founded by Steinem, Jane Fonda and Robin Morgan, recently released a report to determine just how bad it is for women in America. Entitled, "The Status of Women in the U.S. Media 2014," the feminist findings concluded that females have made essentially no progress thanks to the male-dominated business.

The report begins by listing all the unacceptable statistics that can explain why women have "barely budged" and even "regressed" in the professional media world. For instance, two-thirds of newsroom staffers are men. One particular section discusses the makeup of sports journalism: “90 percent male, 90 percent white; sports editor ranks have far to go.”

Um, it’s sports. Can we not all agree this is kind of men’s forte? Is it really that surprising that more men would be pursuing careers in sports journalism than women?

A three month snapshot in 2013 of articles appearing on the New York Times’ front page showed that men were quoted 3.4 times more often than women, though the rate was not as high when women wrote the story.

Now I know they're just looking for any excuse to cry “war on women!”

Ironically, the report that is trying so hard to expose sexism is sexist in its very nature. Just look at the key for this graph depicting the ratio of white male to female and minority guests on Sunday shows.

“White men, everyone else.” Classy huh? Can you imagine if this report used any other demographic paired with “everyone else?” They could probably expect lots of nasty phone calls. But, as culture would have it, it seems as though it's become acceptable to alienate men this way.

One thing Steinem’s report leaves out, is the progress women have made in the media.

For instance, another page of the report presents the lack of women who have made it onto the “Heavy Hundred” news talk radio show list. No, no women made the top ten this year. But, why not praise bold ladies like Dana Loesch or Laura Ingraham (who just happen to be conservatives) for having their voices heard by a growing radio audience instead of harping about the women who didn’t make the list?

Maybe if Steinem and her fellow feminists focused on female achievements instead of shortcomings, the world wouldn’t seem so glum for our sex.

The way to make women visible isn’t to make men invisible. I hope one day Steinem and her cohorts will realize men are people too.