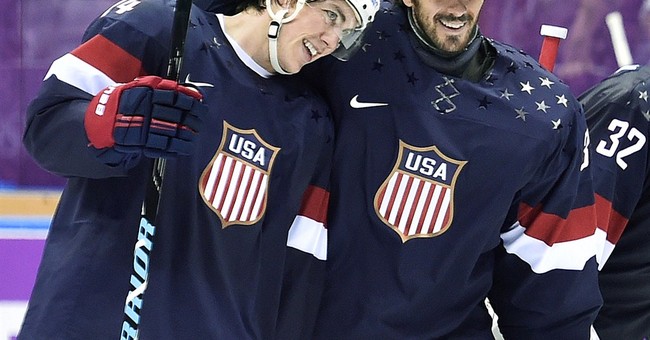 If you didn’t know who T.J. Oshie was before today, odds are you heard his name chanted at least once since 10 a.m. After the St. Louis Blues forward scored the clinch goal for Team USA in an Olympic hockey match against Russia in a never-ending shootout, Oshie has quickly become everyone’s new favorite player. He even gained nearly 50,000 new Twitter followers after leading his team to victory.

But, he’s not only talented. He’s humble. Here’s what Pittsburgh Tribune-Review’s Dejan Kovacevic posted on Twitter following the exciting game:

Just had good talk with America's newest hero. Only don't call T.J. Oshie that. "The American heroes are wearing camo. That's not me." #USA

Thank goodness we have athletes like Oshie representing us. He proved he can not only “wow” with a hockey puck, but he can recognize and respect the sacrifices of our military. Now that is something to be admired.

"The American heroes are wearing camo. That's not me." - TJ Oshie... Well Oshie I think you made them proud. #???? pic.twitter.com/kjnUydOVk4

And these folks in a Boston bar know how to celebrate.

I dare you not to start cheering "USA! USA!"