The Telegraph Has High Praise for Scott Walker 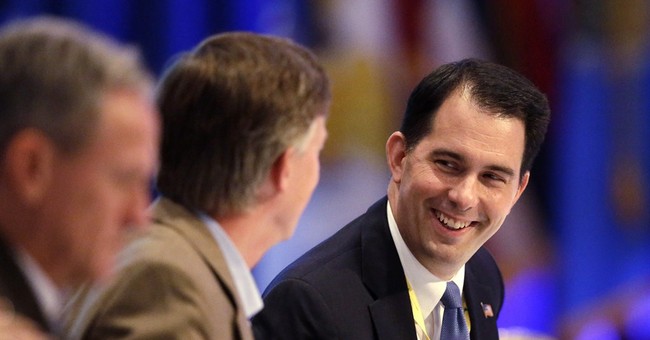 A certain Republican governor is getting some high praise across the pond. Dr. Tim Stanley, a historian for the United States and contributor to Britain’s The Daily Telegraph published a piece Monday entitled, “How Scott Walker and the conservatives saved Wisconsin. America, take note,” commending the governor of Wisconsin for employing a conservative agenda “that actually works”:

The fact is that Wisconsin's recovery is real but fragile, and Walker has balanced the books without trying to impose on his state the kind of pure libertarian economics that his opponents feared. It's an example of sensible conservative governance – not, as so much of the liberal media seemed to imagine, a Tea Party coup d'etat. No wonder he beat the recall effort.

As many “recall,” Walker defeated bullying labor unions in November 2011 after they demanded he reinstate their collective bargaining rights. Walker refused to cave and won the recall election – handily. It’s a good thing for the Badger State, too, for his conservative policies have worked wonders. Stanley continues to compliment Walker's efforts:

Not only has he delivered the goods but (this is the best bit) Walker now wants to give those goods back to the voters in the form of a tax break. So the message to America, and the rest of the world, is this: get spending under control, cut business taxes, create a welfare system that encourages people to seek work and you will balance the budget, reduce unemployment and be able to let people keep more of their money. It turns out that conservative economics, applied with determination and care, can work.

And what has this conservative governor done with the surplus his state can now enjoy? He’s proposing $800 million in tax cuts:

“What do you do with a surplus? Give it back to the people who earned it. It's your money," Walker said.