WaPo Calls Michelle Obama a "First Lady for the Ages" 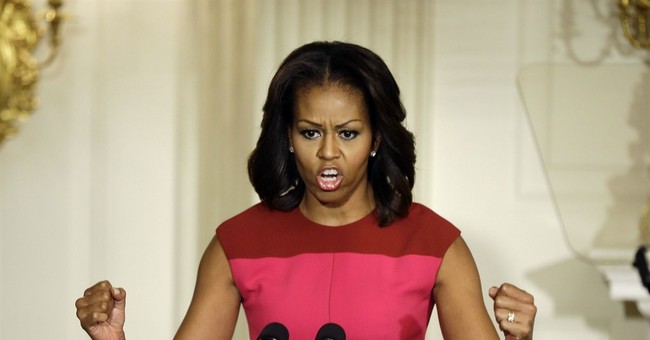 The Washington Post wants you to know First Lady Michelle Obama is “more than meets the eye.”

To celebrate Mrs. Obama’s upcoming 50th birthday, the publication printed a glowing feature about her in its Express newspaper. The piece lists a few “Myths” about the First Lady, debunking each one with important “explanations.” Here’s just a couple:

Myth: She is a food tyrant of Bloombergian intolerance.

“Her focus on the nation’s eating habits has led to complaints that she wants to deprive Americans of dessert. But Obama repeatedly expresses her belief in moderation, talks about her affection for French fries and unapologetically went in for a 1,700-calorie splurge at Shake Shack in 2011.

This is why we’re lauding the First Lady? Because she loves French fries and went to eat at Shake Shack three years ago?

During the 2008 presidential campaign, Obama’s senior thesis, “Princeton-Educated Blacks and the Black Community,” was exhumed from the archives of the university and fueled the perception that she detested it. “My experiences at Princeton have made me far more aware of my ‘Blackness’ than ever before,” she wrote.

Still, there’s no active vitriol. The conclusions of her thesis are nuanced and measured. More than a reprimand of a school struggling with diversity, they explain her determination to stay connected to the black community.

Fact: The Let’s Move! Campaign has been a failure.

Data from a 2012 National Youth Fitness Survey of about 800 teens and preteens revealed that 3 in 4 kids aged 12 to 15 fail to meet the federal government’s minimum recommendations of an at least an hour of vigorous activity each day.

What’s more, students complained the meals enforced by Let’s Move! “tasted like vomit” and the lack of caloric intake left children hungry in their classes and without energy in their after school sporting events.

Fact: Mrs. Obama did engage in race baiting in college.

The First Lady's senior thesis was full of hateful language against her peers and professors whom she thought judged her because of the color of her skin: "Regardless of the circumstances under which I interact with whites at Princeton, it often seems as if, to them, I will always be black first and a student second."

It's hard to defend such language, yet the WaPo editors had no problem trying to downplay it. Question: Would the publication go to such lengths to debunk myths about First Lady Laura Bush? How about Ann Romney, if her husband had won last year? I doubt it.

But, everyone deserves to have a nice birthday, so I will add a nice ‘fact.’

Fact: She does have an impeccable taste in fashion and her second inaugural dress will be displayed at the Smithsonian – a first in First Lady fashion.