Have You Met...Rep. Mike Pompeo 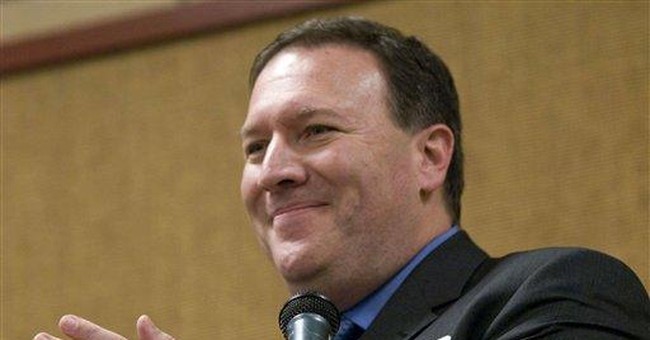 This article first appeared in the January issue of Townhall Magazine.

As a cavalry officer on the Iron Curtain in the late 1980s, Rep. Mike Pompeo (R-KS) would look over to the East German side and see guard towers and dogs blocking people from freely moving west. Witnessing that lack of liberty every day is just one reason this representative from Kansas appreciates and strives to defend American freedom today.

Pompeo has a natural instinct for protecting others. This quality led him to pursue an education at the United States Military Academy at West Point, where he learned values perhaps only a soldier can.

“There’s no doubt West Point impacted who I am [...] It has an enormous emphasis, not only on military aspects, but character development. Whether it’s the honor code, or the interactions you have, both with the cadet leadership and the academy leadership, every place you are is a character test.”

The lessons Pompeo learned at the prestigious military institution serve him well in Congress now 30 years later. But, before Pompeo put his character and discipline to practice on Capitol Hill, immediately following his graduation from West Point in 1986, he took a post from October of that year until September 1989 patrolling what was then the East German and communist Czech Republic border, where stark differences helped shape his view of liberty.

“You could see the front line of what it was like to live in a state that had tyranny, absolute unfettered tyranny. [...] You stare across the border and watch the East Germans try to keep those people from crossing into our country, into West Germany, or crossing even into Austria and you’d watch and you’d say, ‘They’re living in a world that’s very different and we should never let America get to be that kind of place.’”

Seeing people suffer under authoritarian rule in East Germany made Pompeo even more thrilled with the change that was to come soon after he left his post. He animatedly described the moment he heard the good news, “I left literally three weeks before the Berlin Wall actually came down [...] The very spaces we were patrolling [...] had been opened up wide [...] the traffic was one direction, so you open the gates, and people wanted to flee only one direction, they want to leave tyranny and flock to freedom [...] pretty remarkable stuff.”

The experience of witnessing communism up close makes Pompeo cautious of securing our own freedom and just happens to be one reason he ran for Congress.

“We’re nowhere near where those places were, but we have to be ever vigilant to make sure that we keep our republic as well.”

Pompeo is now on the House Intelligence Committee, where he is very keen on a national security issue some tend to overlook—the threat of cyber-attack.

“I’ve been working for a year and a half trying to convince my colleagues that we’ve got to free private industry, to keep their own networks secure, there’s things government can do to facilitate that,” Pompeo said. “If we don’t, we’ll continue to have the Chinese, and the Iranians and the Russians stealing our stuff and that’s just unacceptable – from a commercial and a national security perspective. So I’ve been one of a concise group working pretty hard on cyber security [...] that threat’s not going away.”

Another reason Pompeo sought a seat in the House of Representatives, is to limit the scope of big government.

“At some point the government expands into the private sphere so far that you live in a place with a whole lot less freedom,” he explained. “I didn’t like that that was the direction of travel for our country, and decided to come to Washington to try and be a small part of bringing it back.”

Pompeo’s business background gives him a significant advantage in helping to reel in Big Government. In the mid-1990s, the congressman started a machine shop with two of his West Point classmates called Thayer Aerospace, where they made airplane parts for customers such as Boeing and Lockheed Martin. The business, which he says was “great fun,” was also successful.

He had over 400 employees by the time he sold the company in 2005. As for his second business, another old line manufacturing company, he tried his hand at the oil and gas industry, making hard goods and completing drilling repairs. Suffice it to say, Pompeo knew a thing or two about management when he started running for Congress in 2010.

“You eventually have to figure out how to balance the books,” he said. “So that’s the reason I gave up my day job to come do this was to go fight to create the space where spending matches America’s capacity to tax and that means economic growth and a smaller, humbler federal government.”

With Pompeo’s experience and passion for protecting our homeland, it’s “safe” to say we’re in good hands. •