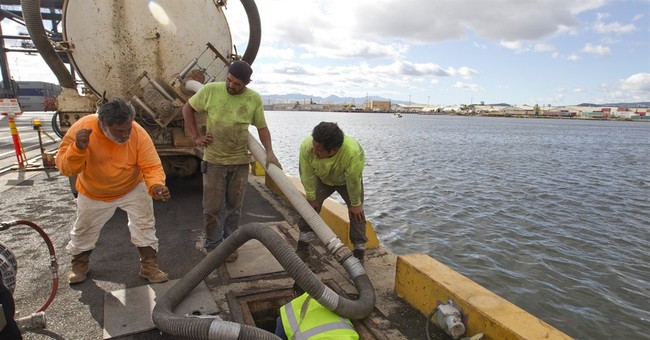 Did you know that in 2012 Americans spent an average of $3,000 on gas? – more than doubling 2002’s average of $1,235? Were you aware our country owes $900 billion because of our dependence on oil? These are just a few statistics that should give Americans a little more to think about when they’re filling up at the pump.

Kenneth Blackwell and General James Conway are two leaders determined to make more people aware of our country’s need for energy security. One a conservative voice for American values and the other a retired United States Marine Corps four-star general, Blackwell and Conway have teamed up as members of the leadership council for Securing America’s Future Energy, an organization dedicated to what its title suggests by reducing the nation’s dependence on oil. I had the chance to sit down with them at the Values Voter summit this weekend to get their insight on the state of American energy.

“The first thing we need to do is understand the terms,” said Conway. “We would say there’s no such thing as energy independence. But a lot of people think as our import requirements go down […] One of these days we’ll produce everything we need, gas prices will plunge and the country will be one humming machine. That’s not gonna happen. It’s a global market […] We do believe the country can achieve energy security and that’s the term we like to emphasize.”

“The global market is not a free market,” said Blackwell. “Prices are kept artificially high and that has a very negative impact not only on our economy and our job creation, but on our security as a nation […] You begin to see that our transportation sector is overly dependent on oil.”

Blackwell proceeded to explain why those pesky gas prices aren’t likely to have a quick fix.

“That volatility is not in our hands. That’s the problem […] For instance: Canada, Norway, these are all exporting countries. I was just there earlier in June. The price at the pump was still staggering for the average Canadian family. So, that suggests that just more production and becoming an exporting country is not the final answer. That’s why we must look at these alternative ways of moving our transportation vehicles.”

Now for the solutions. Despite noting that energy security is hard to come by, General Conway also suggested it’s not out of our reach.

“It may be a bit optimistic to say but we have the opportunity, unique to every other nation, to pretty soon have the largest reserves of petroleum, natural gas and coal,” he said. “And that just cries out for a national strategic energy plan. Now, anytime a military guy starts talking about a plan people get nervous. But I’m a big believer that a plan is a little more than a framework. As a plan needs adjustment, then you adjust. On the march to Baghdad we had a plan, but we also had 23 decision points along the way for that plan to change if it needed to […] We’ve got a bunch of policies, but no central plan that would really benefit the country.”

Conway outlined the SAFE organization’s short and long term goals, which seemed to figure into this needed plan.

2. Because we are now consuming 19 million barrels a day, become more energy efficient as a nation, which technology can accomplish.

3. Develop alternative fuels such as electric and natural gas.

One potential answer to at least some of these initiatives, the two experts suggested, is the controversial Keystone pipeline, which sometimes seems destined to remain an argument rather than a reality. Nevertheless, Blackwell and Conway spoke of the positive impacts the pipeline could have on our economy and overall independence were it finally built. Conway shared the good news, for instance, gas drilling projects have brought to his own community in Pennsylvania near the Marcellus Shale.

“You can’t find a place to stay,” the general said. “You have to elbow your way into a restaurant. It’s great for the local community. And not just for the oil companies. You’ve got guys that are building roads, you’ve got people who are driving trucks […] It is job-intensive and I think the pipeline would create that force.”

As for the Keystone’s environmental critics, Conway is understanding, yet exhausted by their lack of understanding.

They’re well-intended people, I do think they need to understand more about the issue of energy security […] “Listen, that oil is gonna go somewhere,” he said. “Canada’s gonna sell that oil. And if they don’t build the Keystone, they’re gonna build one over to their West Coast and it’s gonna go to China […] If we’re gonna go ahead with what needs to be done, to overcome the vulnerability that we see, you’re gonna have to have people compromise […] You’ve got a lot of people are concerned with the environment – the oil companies are concerned about the environment. I hunt and fish with the guy who’s doing the Marcellus Shale, he said, ‘Of course, you wouldn’t believe the payroll I’ve got on people making sure we don’t have incidents, that we do take care and are good stewards of the land’ […] It’s not just an environmentalist issue.

The general had one more thing to say to those opposed to drilling.

“By the way, show me the damage…these guys are very good at what they do and there’s just no evidence that they’re being reckless or that you need to think the sky is falling.”

So, why go through all this trouble and inevitably anger environmentalists to find alternative sources of energy? Blackwell and Conway both had pretty good reasons.

“In 237 years, we have become the most prosperous, the freest, most politically diverse population on the face of the Earth,” said Blackwell. “Freedom is a major part of the equation […] and anything that takes away from that is bad. That’s the simple answer.”

“It is about quality of life,” insisted Conway. “Looking at it from a strategic lens, it’s about America’s leadership role in the world. To the degree we are reliant on such a high percentage of import to make our country work, it impacts our national security making […] If we have to always be concerned about decisions we make having an adverse effect on our economy, it’s a weakness, a vulnerability we have to take care of […] Our national leadership capacity is directly tied to that import percentage and as soon as that goes down the more flexibility we have to do what the world needs America to do.”

To sum up: Drill baby drill.