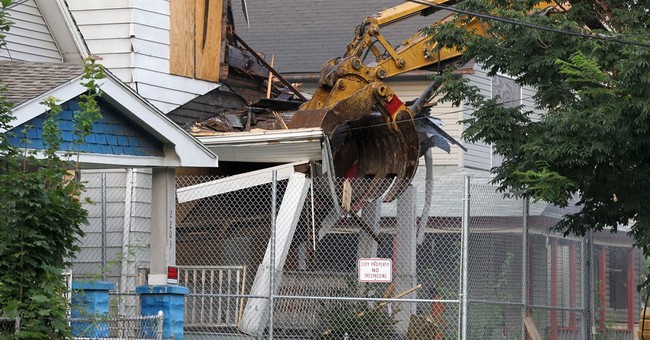 The last painful memories were thrown into the back of a garbage truck.

What looked like a normal home on Seymour Avenue was hell for Michelle Knight, Amanda Berry and Gina DeJesus. Over ten years ago, Castro, 53, lured each of these women into his house in Cleveland, Ohio and held them captive for years, using them as sex slaves. Among other atrocities, Castro kept his victims chained to the wall, trapped in a makeshift alarm system made out of wired alarm clocks and stuck behind boarded windows and bolted doors -- denying the women any chance of escape.

Crowds cheered as the destruction of this House of Horrors began, including one of Castro’s victims, Michelle Knight. Knight brought yellow balloons to represent children who are still missing and, during a brief statement, she asked God to grant these victims strength and to give their families hope.

The now infamous address, 2207 Seymour Ave, was erased from Google Earth before the demolition even began.

For his unimaginable actions, last week Castro was sentenced to life in prison plus 1,000 years.

To both him and his house -- good riddance.