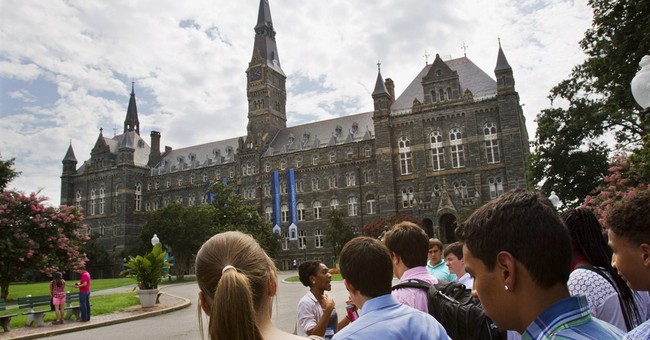 Parents, shield your eyes. Deep in the online pages of the New York Times, in the Fashion & Style section, is an article that will make you think twice about sending your teenage daughter to college. Author Kate Taylor, in her in-depth seven-page piece from last week, “Sex on Campus – She Can Play That Game, Too,” seems to take joy in writing about young women and their decisions to choose one-night stands over serious relationships.

In true Scarlet Letter fashion, the author refers to her first student subject as ‘A,’ which happens to be her middle name. ‘A’ is a junior at the University of Pennsylvania who spends her free time in a unique way – “texting her regular hookup,” a guy she is “sleeping with but not dating.”

‘A’ says she isn’t interested in a “romantic meaningful relationship” because she’s too busy with her schoolwork. But, she appreciates the “cost-benefit” analyses of casual sex.

“We are very aware of cost-benefit issues and trading up and trading down, so no one wants to be too tied to someone that, you know, may not be the person they want to be within a couple of months,” she said.

Another young girl with an anonymous title, ‘M,’ beams about her decision to have a one-night stand with a guy she knew from class after she started viewing her virginity as a hindrance.

“’Honestly, all of my friends, they’re super envious, because I came back with the biggest smile on my face.’ As she had expected, she and the guy remained friendly but nothing more. Yet she was still happy with her decision.”

M goes on to explain how she and her best friend went from wanting to find a boyfriend to trying to find “hookup buddies,” explaining that a man’s performance in bed became more important than his personality.

In addition to interviewing sexually active students, Taylor also quotes “expert” Elizabeth A. Armstrong (never knew ‘A’ was such a common middle name). Armstrong is a sociologist at the University of Michigan who studies young women’s sexuality. She argues that women at elite universities are choosing hookups because they see relationships as too demanding and potentially too distracting from their goals.

“Women say, ‘I need to take this time for myself — I’m going to have plenty of time to focus on my husband and kids later,’ ” she said.

Ignoring the questionable credibility of her study in women’s sexuality, does Armstrong’s point that women want to wait to have families justify their sleeping around in the meantime?

A few of my other favorite lines:

“A., for example, said that she did not want to settle down until she could choose a partner knowing that his goals and values were fixed.”

As opposed to her own goals and values – which include sleeping with men with no strings attached.

“I definitely wouldn’t say I’ve regretted any of my one-night stands.”

To be fair, Taylor does give voice to a few young women with the opposite view – that abstinence and marriage are admirable goals. But, these opinions are buried in the last few paragraphs of the piece.

I find it ironic Taylor’s article lauds women’s’ rights to embrace a hookup culture, while bashing men for doing the same thing. In one section of the piece, Taylor quotes a female student talking about how the opposite sex often take advantage of women.

“I think a lot of guys get the idea: ‘O.K., this girl’s coming to this party, and she’s drinking. That means her goal of the night is to hook up with somebody,’ ” she said. “They’re like, ‘O.K., she came out, and if she dressed like that, it must mean that she wanted to hook up.’ ”

Well, according to the rest of Taylor’s piece…they do! Is not her whole article about women actively searching for casual sex? Yet now Taylor is faulting men for obliging these young women’s sexual desires.

What’s more, Taylor offers no male perspective in her seven pages to give readers an idea of how they view today's hookup culture. According to this 2011 USA Today poll, men now actually want marriage more than women, proving they are increasingly interested in meaningful relationships.

I hope the day comes when higher education returns to hitting the books – not the sheets.