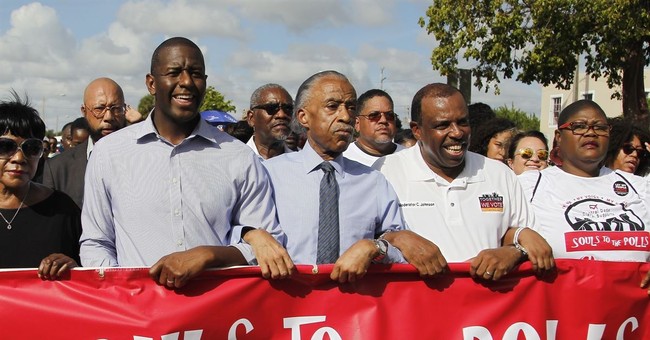 This year's Super Bowl was a relatively blasé affair by most accounts. The Patriots won for the six time in its career. There were no memorable commercials except for a "Twilight Zone" reboot tease and an ad celebrating 100 years of the NFL. The halftime show was pretty underwhelming except for a jarring "Spongebob Squarepants" transition. The one good thing that anybody could say about the game is that there were barely any politics throughout the proceedings.

About an hour before the game proper started, Al Sharpton gave an accusatory address to the NFL and its fans on MSNBC's "Gotcha" segment.

Sharpton used this time to call out football fans for being racist because they didn't approve of black players kneeling for the National Anthem. The protest, instigated by former 49ers quarterback Colin Kaepernick in 2016, was a demonstration against police violence against black Americans.

"If you're insistent that freedom of speech is inviolent [?] and then deride black athletes of sitting out of patriotism's ritual harkening back to, oh, 2009, then you are exactly what Kaepernick was protesting," the reverend said, looking straight into the camera.

Sharpton then went on to call out the NFL itself for getting minority entertainers for the halftime show to "reassure the so-called fans after Jay-Z, Rihanna, Cardi B and others reportedly said no." The "others" Sharpton referred to apparently included P!nk, whose name was included with the other aforementioned performers on a screen behind Sharpton. The choice of halftime entertainment has been a sticking point for Sharpton, who had previously chided rapper Travis Scott for accepting to perform with Maroon 5.

Sharpton concluded his lecture with a strange attempt to relate to the audience he had just thrashed. "So, enjoy tonight's action," he said. "Get the chips and the salsa ready along with that excuse for your boss in the morning. But remember, if America is ever going to tackle injustice, it cannot continue to punt just because it's convenient."