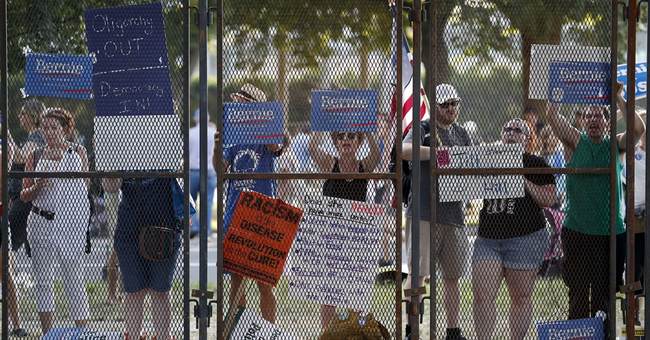 Last night Sen. Bernie Sanders decided to extend the olive branch to Hillary Clinton and nominated her on the convention floor, but it looks like his supporters don't share the same sentiment. The 'Bernie or Bust' crowd organized a walkout from the convention, and they're continuing their protest outside the arena.

Just look at how crazy they went after Sanders conceded to Clinton on the convention floor.

The supporters then decided to take their protests to a media tent outside. They then proceeded to stage a sit-in at the media tent, and some protesters refused to move.

A lot of the protesters decided to duct-tape their mouths to symbolize how they had been silenced, and they also held up signs that had phrases like "The revolution continues" and "DemExit."

There was also a protest outside of the media tent in the streets, and this protest got quite large after it combined with a black live matters protest. By the end of the night the protest had grown to around 1,000 people.

At one point, the protesters decided to climb the 8-foot walls that were set up to block off the secure zone around the arena parking lot. Police immediately arrested four protesters and charged them with entering a restricted arena. They are expected to appear in court Wednesday to deal with their charges.

Some even decided to burn the American flag in this protest.

Most of the protesters also believe that Clinton's nomination will split the Democratic Party in half.

"I suspect we are witnessing an event that will fundamentally change American politics," said Cory James, a 22-year-old college student from Flint, Michigan. "We are tired of corruption," said Carole Levers, a California delegate. "The media and the D.N.C. colluded to block Bernie Sanders so he wouldn't be seen. We need to hit the reset button."

So much for that Democratic Party unity that they been trying to tell us is there.