How Obama Will Bypass Congress On His Iranian Nuclear Arms Deal 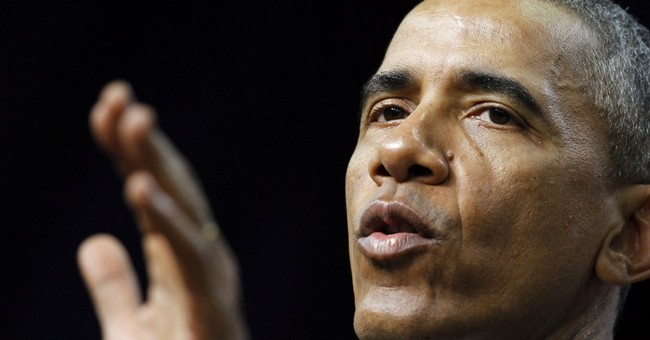 Israeli Prime Minister Benjamin Netanyahu gave up trying to change President Obama's mind about a nuclear deal with Iran long ago. He knows Obama is determined cut a deal with Iran on nuclear weapons, at any price, on the belief that Tehran will then become a reliable ally in the region.

That is why Netanyahu chose to speak to Congress personally Tuesday. He knows Congress is the only institution in America that has a chance of stopping Obama's Iranian plans. But, as The New York Times' David Sanger first reported in October, Obama has already decided to bypass Congress on his Iranian arms deal entirely.

But doesn't Article II, Section 2, Clause 2 of the United States Constitution read, "The President ... shall have Power, by and with the Advice and Consent of the Senate, to make Treaties, provided two thirds of the Senators present concur."

How can Obama sign a nuclear arms deal with Iran without submitting that agreement to the Senate?

The same way that Obama has rewritten federal immigration and education law without Congress: by expanding executive power.

Obama will claim that his deal with Iran is not a treaty but a "sole executive agreement" that requires no approval from Congress. Sole executive agreements have been used by presidents since the early 1800s, but the exact scope of this power has long been in question. The Supreme Court has allowed many such agreements to stand (e.g. Dames & Moore v. Regan or American Insurance Ass'n v. Garamendi), but the Court has always required at least some evidence that Congress at least acquiesced to those policies.

The sole executive agreement power has also been used to end formal arms treaties, most recently by President Bush in 2001 when he unilaterally exited the Anti-Balistic Missile Treaty with Russia. However, new arms deals have almost always been submitted to the Senate for approval, including Bush's 2002 Strategic Offensive Reductions Treaty with Russia.

Obama's nuclear arms deal with Iran would be an unprecedented expansion of this sole executive agreement power.

But the Treaty Clause of the U.S. Constitution is not the only congressional hurdle Obama must clear. There are also existing sanctions regimes that have been passed by both chambers of Congress and signed into law by the president. One was even signed by Obama himself.

But each of those laws also contains generous waiver provisions that allow Obama to suspend enforcement of the sanctions for up to six months at a time.

Also, remember that Obama's agreement will not only be with Iran, but with many other countries that are currently enforcing sanctions against Iran as well. Those countries could lift their sanctions up front, while the U.S. sanctions would not be scheduled to be lifted till then end of the agreement, which is rumored to be up to ten years. Here is how White House Press Secretary Josh Earnest explained how the deal would work Monday:

What we envision is an agreement that puts in place a series of steps where Iran takes some steps to demonstrate their compliance with the agreement, and a little bit of sanctions relief is offered, and that that is the process that continues until we can have a lot of confidence in Iran’s willingness to live up to their end of the bargain. And once they do, then we will ultimately get to a place where we want to start to make changes to the statutory sanctions regime that was passed by Congress.

And, yes, removing those sanctions, as passed by Congress, would require an act of Congress and I do think could plausibly be interpreted as Congress signing off on the deal. ... And it’s why as we move forward in this process -- ultimately it’s closer to the end than the beginning -- that we're going to need Congress to weigh in on this. And again, the reason for that is that the administration does not envision a scenario where substantial sanctions relief is offered right away.

(emphasis added) So what Obama will do is announce his agreement, let other countries lift their sanctions for the first few years of the agreement, and then, years from now, long after Obama has left office, the next president will have to deal with Iran's nuclear program.