How Republicans Will Respond To Obama's Executive Amnesty 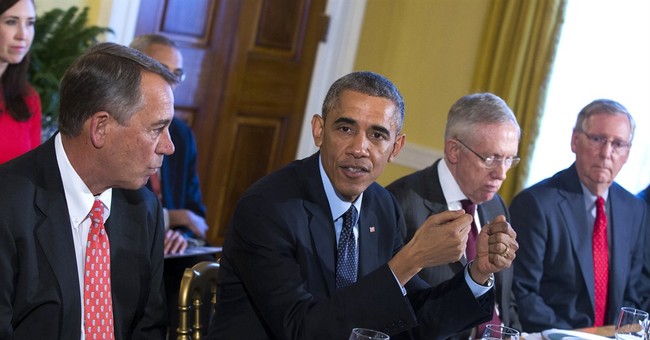 Regardless of when President Obama announces his plan to give work permits and Social Security numbers to millions of illegal immigrants, House Republicans are now expected to pass a short-term government funding bill early this December that will allow them to defund Obama's work permit giveaway early next year.

This stopgap measure could take two forms, depending on the scope of an executive order. It could fully fund the government at current levels, including the Department of Homeland Security that oversees immigration, and run through February or March. Or it could provide for a short-term continuing resolution for DHS while fully funding the rest of the government through the remainder of fiscal 2015. The latter option is favored by Rep. Tom Price, R-Ga., the likely next chairman of the House Budget Committee.

Whatever route they do end up taking, it will probably come after Obama formally introduces his amnesty plan. The House is scheduled to go on Thanksgiving recess after this Thursday, and are not expected back till December 1st. Meanwhile, outgoing-Senate Majority Leader Harry Reid (D-NV) just told Univision Obama's announcement will come this week.

If Republicans do decide to fund the rest of the federal government, while passing a separate funding bill that specifically limits Obama's ability to implement an executive amnesty, even Senate Democrats acknowledge that would be a perfectly legitimate tactic.

“It happens all the time,” retiring Sen. Carl Levin (D-MI) told National Review last week. “That’s not uncommon that there’s amendments saying ‘none of the funds in this appropriation bill may be spent for’ — fill in the blank,” Levin said.

Asked specifically whether Republican attempts to defund Obama's amnesty could be called "an effort to shutdown the government," Levin disagreed. “That’s not slash-and-burn. That’s not bringing down the government. That’s a fairly traditional, targeted approach to make a policy point.”

One wrinkle in the emerging Republican plan is that the agency that actually issues work permits, the United States Citizenship and Immigration Services, is almost entirely (95 percent) self-funded. That means that during past government shutdowns 97 precent of USCIS employees kept working.

This does not mean, however, that Obama could veto legislation that defunded USCIS and his amnesty would continue without a hitch. USCIS only has a set number of employees, and without new legislation or funding, Obama does not have the ability to significantly boost their output.

If they're smart, when Obama does announce his next amnesty, Republicans should focus on how it will hurt law abiding immigrants who have been patiently waiting for their lawfully earned immigration status.