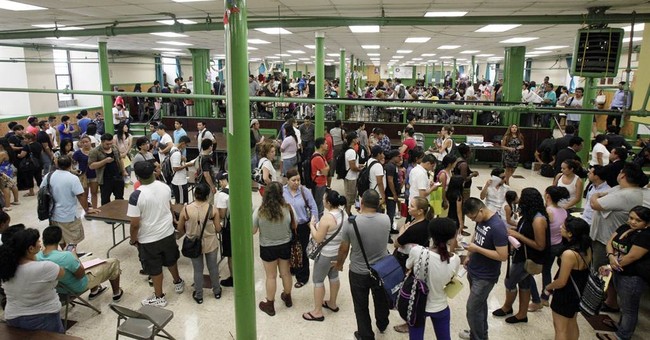 The president is doing what every single law enforcement agency across the country does: Put in place rational priorities to ensure that limited resources are focused on the populations that pose the greatest threat to public safety and border security. Every single law enforcement agency in America struggles with the fact that their resources are not conditioned to cover every single violation of the law. What prosecutors and police chiefs have done for years is implement enforcement priorities. That’s what the president has done.

So Obama's entire legal justification for his DACA program rests on the premise that a broad based invitation for illegal immigrants to apply for temporary amnesty ensures "that limited resources are focused on the populations that pose the greatest threat to public safety and border security."

But we already know, for a fact, that DACA did the exact opposite. Instead of conserving limited resources, DACA stretched DHS capabilities and degraded its ability to enforce good congressionally approved immigration law.

How do we know this? Well for starters, just look at the DACA application* which requires a $465 filing fee. If DACA is such a saver of DHS resources, then why is Obama charging generally cash-strapped illegal immigrants $500?

More importantly, we know from subsequent reporting that Obama underpriced the cost of administering his temporary amnesty program. The New York Times reports:

The long waits came when the agency, Citizenship and Immigration Services, shifted attention and resources to a program President Obama started in 2012 to give deportation deferrals to young undocumented immigrants, according to administration officials and official data. …

Until recently, an American could obtain a green card for a spouse, child or parent — probably the easiest document in the immigration system — in five months or less. But over the past year, waits for approvals of those resident visas stretched to 15 months, and more than 500,000 applications became stuck in the pipeline, playing havoc with international moves and children’s schools and keeping families apart.

(emphasis added) In other words, instead of ensuring that limited resources were saved so that the DHS could better enforce good immigration law, Obama's DACA program shifted existing resources away from those programs thus degrading DHS's immigration law enforcement capabilities.

Amnesties are never free. They take huge sums of cash and employee time to administer. If DACA's legal justification is built on the premise that it enables DHS to better enforce the law by conserving limited resources, then it is built on a lie.

* Never before his any president ever created an application process to apply for deferred action, which all presidents before Obama used sparingly.