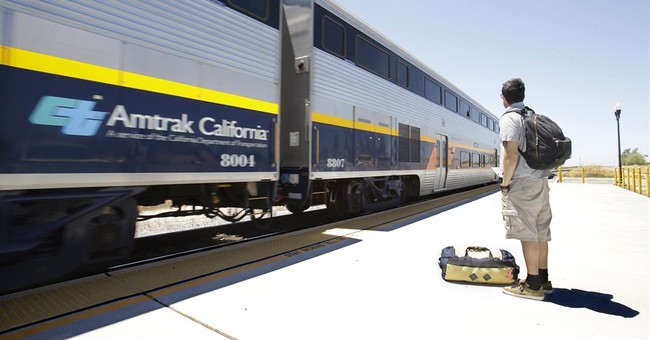 California Gov. Jerry Brown can not spend state bond revenues on President Obama's signature transportation project until the state can identify how they will pay for the entire $68 billion project, a California court ruled Monday. The decision almost certainly spells death for the project.

This August, Superior Court Judge Michael Kenny ruled that the California High Speed Rail Authority (CHSRA) “abused its discretion by approving a funding plan that did not comply with the requirements of the law."

That law would be Proposition 1A (the “Safe, Reliable, High-Speed Passenger Train Bond Act for the 21st Century”), which required the CHSRA to identify “sources of all funds to be invested in the corridor” and complete “all necessary project level environmental clearances” before construction can begin.

At the time, Democrats sold Obama's high-speed rail plan as a $40 billion project. But that number quickly skyrocketed to more than $100 billion, after California voters approved it, of course.

The CHSRA then scaled the project back down (by cutting most of its high-speed capabilities in metro San Francisco and Los Angeles) to just $68 billion, where it is today.

Through his failed stimulus law, Obama gave California more than $3 billion for the train, and the California legislature has approved more than $10 billion in bonds. But that still leaves more than $50 billion unfunded and the CHSRA has no plans on how to fill that gap.

In August, Judge Kenny declined to invalidate a separate legislative appropriation for the project, but he left open the possibility that he could forbid the state from spending bond proceeds until the came up with a full funding plan. That is exactly what Judge Kenny did Monday.

California is still free to spend the $3 billion that Obama gave them on the project, but after that, the CHSRA will be broke.