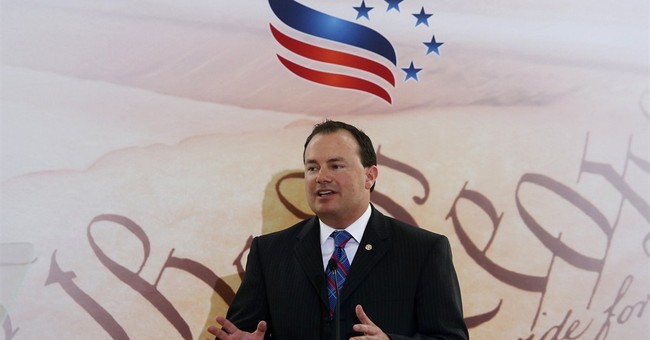 On February 6, 1977, a former-governor of California told a packed hotel ballroom in Washington, DC, "The New Republican Party I envision will not be, and cannot, be one limited to the country club-big business image that, for reasons both fair and unfair, it is burdened with today."

"The New Republican Party I am speaking about is going to have room for the man and the woman in the factories, for the farmer, for the cop on the beat and the millions of Americans who may never have thought of joining our party before, but whose interests coincide with those represented by principled Republicanism."

More than three years later, that former-governor, Ronald Reagan, was elected as the 40th President of the United States, ushering a decade of conservative dominance in Washington.

Yesterday, at The Heritage Foundation, Sen. Mike Lee (R-UT) quoted from that very same Reagan speech, reminding his party, "If we truly believe in our principles, we should sit down and talk. Talk with anyone, anywhere, at any time if it means talking about the principles for the Republican Party. Conservatism is not a narrow ideology, nor is it the exclusive property of conservative activists."

For some political commentators, Lee's speech seemed like an abrupt turn from the senator's recent fight to defund Obamacare through a government shutdown. And for those that only sporadically pay attention to Lee, that impression is fair. But if you follow Lee closely, then you would know that yesterday's speech was part of a much larger and long-term effort formulate a conservative policy agenda that can unite the party and govern the country in the next century.

Lee kicked off this debate with an April 2013 speech, also at The Heritage Foundation, that sought to reorieantate the party away from some of the failed messages of the 2012 Romney campaign.

"In the last few years, we conservatives seem to have abandoned words like 'together,' 'compassion,' and 'community,' as if their only possible meanings were a secret code for statism," Lee said. "This is a mistake. Collective action doesn’t only—or even usually—mean government action."

"Ours has never been a vision of isolated, atomized loners," Lee continued. "It is a vision of husbands and wives; parents and children; neighbors and neighborhoods; volunteers and congregations; bosses and employees; businesses and customers; clubs, teams, groups, associations—and friends. The essence of human freedom, of civilization itself, is cooperation. This is something conservatives should celebrate. It’s what conservatism is all about. Freedom doesn’t mean 'you’re on your own.' It means 'we’re all in this together.'"

Lee echoed these themes again in September, this time at the American Enterprise Institute, when he identified a growing problem that is undermining American civil society.

"From Wall Street to K Street to Pennsylvania Avenue, we find special interests increasingly exempted and insulated – by law - from the rigors of competition and the consequences of their own mistakes," Lee said. "All of this points to what really is an inequality crisis in America today – a crisis not of unequal wealth or income… but unequal opportunity. Progressives, from the president on down, say that inequality in America today is a failure of the free market, resulting from insufficient government intervention. But if you look closely, you start to notice, the opposite is true."

And so, the great challenge to the Republican Party is to craft such an agenda that is at once more responsive to the inequality crisis plaguing American society today, and more consistent with our true, conservative principles."

The core of that agenda should be restoring equal opportunity – the natural, God-given right to pursue happiness – to the individuals, communities, and institutions from whom it has been unfairly taken.

This new agenda should ultimately address the ongoing problems of immobility at the bottom of our economy, insecurity within the middle class, and cronyist privilege at the top.

Lee then went on to outline the bill he will introduce in the Senate today, the Family Fairness and Opportunity Tax Reform Act, which would set a 15 percent rate on all income up to $87,850 – or $175,700 for married couples - and tax all income above that level at 35 percent.

Lee's plan, would also simplify the code, eliminating most deductions, but would also create a new additional $2,500 per-child tax credit that would offset parents’ income and payroll-tax liability.

Lee claims his plan would save a married couple with two children making the median national income of $51,000, $5,000 per year.

"This is money – their own money, right away – for a family to get out of debt, or to move into a better neighborhood with better schools," Lee said. "It could mean affording health insurance, or community college… or cutting back hours at work to coach little league for a season… or just making it home in time for family dinner. ... It would, in short, restore opportunities to working parents and their children to pursue happiness that right now federal policy unfairly denies them."

You can read each of them, and the full text of his speech, here.

But perhaps most encouraging, beyond the details of Lee's plans, is Lee's willingness to work with other conservatives building a consensus on an agenda.

"Too many in Washington seem to believe that on any issue, Republicans should either have one plan – one that everyone supports in lockstep – or no plans," Lee said. "But unity cannot come at the expense of creativity. The day will come when Republicans need a healthcare plan – today we need ten!"

Lee is one of the few politicians in Washington who honestly harbor no desire for higher office. He will not be joining the 2016 White House race. But, he is already shaping the policy contours of that debate, and he is positioned to continue doing so for decades to come.