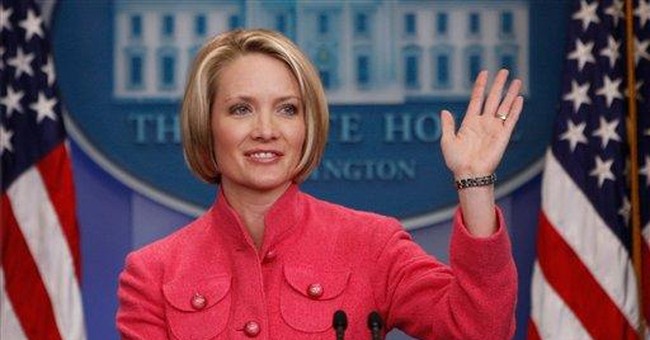 CBC sat down with Dana Perino to discuss her new bestselling book, And the Good News Is…: Lessons and Advice From the Bright Side! Ms. Perino is currently a co-host on Fox News’ The Five, and was President George W. Bush’s last White House Press Secretary.

Congratulations Ms. Perino on your new book,And the Good News Is…: Lessons and Advice From the Bright Side! Can you give us an overview of your book, and what was your inspiration in writing it?

I’m so grateful to have had the opportunity to write the book – it was a lifetime in coming, I suppose. I have always loved to read, and I wasn’t sure I’d actually ever get to write a book. But then all of these terrific opportunities came my way – from love at first sight on an airplane to working at the White House and then to a new career in television news with one of the best, funniest shows on cable – and then I felt like I had something worthwhile to say.

In 2009, I started a mentoring group called Minute Mentoring, and that gave me an idea to combine the best stories from my time as the White House press secretary with my favorite advice for managing a career with a joyful heart. I didn’t want to write a typical book about Washington and politics – I had no gossip nor scores to settle. I have been blessed, and I’ve overcome personal weaknesses (like an obsession with worrying) and have realized that civility and joy is often a choice – one we get to make several times a day. And so the book has a hopeful, you too can do this, go-for-it type of feel.

As President George W. Bush’s last press secretary, you had a window into one of the most consequential presidential administrations in US history. How do you believe history will judge President Bush, the perceived good and bad?

I don’t know…and that’s the good news! I used to think about it all the time, especially after we were well into the second term. I worried, fretted, wondered. But then President Bush told me, “Look, last year I read three books about George Washington, so if the historians are still analyzing the first president, than the forty-third doesn’t have a lot to worry about because he’ll never know.”

I tried to follow his lead and now seven years since we left the White House, I can see that President Bush was right. A president can’t worry about how history will view him or her – they just have to do their best and then let history decide.

However, one of the reasons I wrote the book is that I felt the history was incomplete without a view into the leadership of President Bush from someone who saw it up close. I don’t discuss policy or political decisions in the book, but I do tell a lot of stories from behind the scenes about him as a leader and as a man. And even people who wouldn’t have voted for him or decided they disagreed with him on most policies have told me that my book opened their eyes to what a remarkable person he is.

As a co-host on Fox News’, The Five, what has been some your favorite moments working on set?

The commercial breaks – seriously, they are hilarious! Except for when we’re fighting – and then they’re interesting! I have loved the professional challenge of speaking on my own behalf, rather than for someone else. For so many years I was someone else’s spokesperson, and it didn’t ever faze me in the least. I could speak for the nation and not bat an eye.

But when I started speaking for myself, expressing my own opinions, I struggled at first. I was shy, unsure, and nervous. And Fox News gave me time to come into my own. And now I relish the freedom of being able to speak my mind, and to admit when I don’t have an opinion (such as on the Kardashians – I mean I have. No. Opinion).

Finally, when Greg Gutfeld gets me to collapse in a fit of giggles so much that I can’t even read my tease, I just love that. No one else on cable news is having as much fun as I am.

We were a Lutheran family that attended church and Sunday School every week. I also was in the bell choir and the youth group. Of all the things that helped shape me, it was that practice which led to my faith, which I call upon every day to get me through life. It also helped me so much in school – I feel for kids who don’t grow up knowing the Bible because there is so much in literature that won’t be meaningful or recognizable to them.

As for other books, Madeleine L’Engle’s A Wrinkle In Time is a book I read over and over as a kid. I think it shaped my feelings against conformity and strengthened my belief in the individual. Later on, The Fountainhead stuck with me. And I read Les Miserables over and over – partly for the love story, but also for the fight for freedom. And when I worked on Capitol Hill, someone gave me a copy of Peggy Noonan’s What I Saw at the Revolution, and I realized for the first time that it was really OK to be a conservative woman.

And because I grew up in an avid news consumer family, we always read the big magazines and I got to know George Will, Michael Barone, and Charles Krauthammer. I’d also read Eleanor Clift and think how much I disagreed with her. It was a gradual awakening – not a lightning bolt.