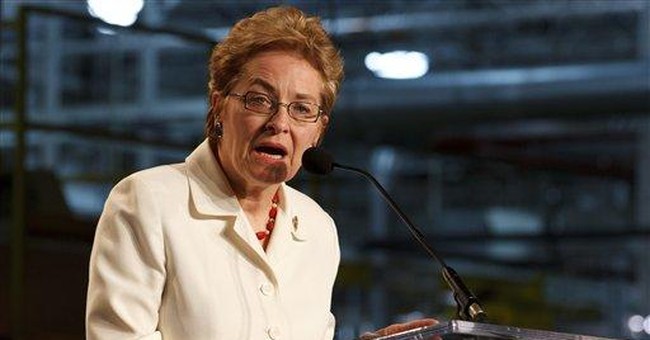 Rep. Marcy Kaptur (D-OH) has some curious thoughts on the apparent epidemic of sexual harassment and misconduct plaguing the halls of Congress: female staffers and members are bringing it on themselves by how they are dressed. Kaptur said that perhaps Congress needs a stricter dress code and she has been "appalled" by the way some of her colleagues have been dressed.

She made these comments during a private meeting of the Democratic Caucus. According to POLITICO, which broke the story, members were "stunned" by her comments.

“I saw a member yesterday with her cleavage so deep it was down to the floor,” Kaptur said, according to the sources present. “And what I’ve seen … it's really an invitation.” The comments left many others in the room stunned, the sources said.

Kaptur said women on Capitol Hill should have to abide by a stricter dress code, like those adopted by the military or corporations.

“Maybe I’ll get booed for saying this, but many companies and the military [have] a dress code,” she said. “I have been appalled at some of the dress of ... members and staff. Men have to wear ties and suits.”

Earlier this year, Speaker of the House Paul Ryan (R-WI) "modernized" the dress code and permitted women to wear sleeveless dresses--as long as their attire is still "professional."

In a statement to POLITICO, Kaptur said that she did not intend to blame victims of harassment and was instead trying to make a statement "elevat(ing) the decorum and the dress code to protect women."

“When I was first elected to Congress my office and I became a refuge for female staffers who had been mistreated by their bosses. Some of them in tears many days. It is something I carry with me to this day and something I brought up during our Caucus meeting," she said. "Under no circumstances is it the victim's fault if they are harassed in any way. I shared the stories from my time here in the context of the ‘Me Too’ legislation and how we can elevate the decorum and the dress code to protect women from what is a pervasive problem here and in society at large.”

I mean, it kind of goes without saying that this is absolutely crazy. Sure, there's something to be said for dressing in a professional manner, but to say that a person's clothing invites harassment is an insult to both the women wearing the clothes and the men that apparently can't be trusted to keep their emotions in check in the workplace. It is not the woman's fault, regardless of what she is wearing.

Years ago, when I experienced sexual harassment in the workplace, I was wearing a standard corporate supermarket uniform of a polo shirt and a pair of khakis. It was not revealing. It was not suggestive. It certainly wasn't "inviting" for much of anything, yet that didn't stop my supervisor from saying what he did to me. (For the record, he was wearing a tie, and yes, myself and other women reported him. He was not fired.)

I wonder what Kaptur would have to say about that.