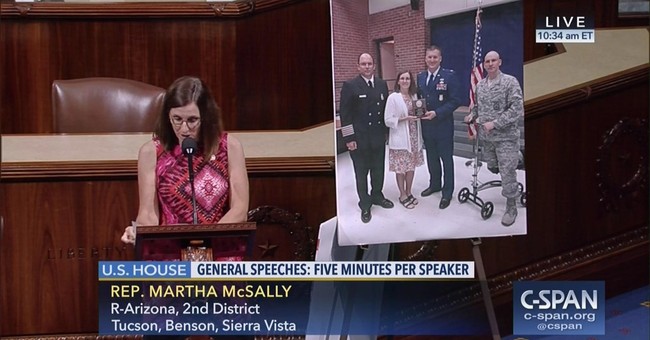 I wrote yesterday about the story that seemingly refused to die--that Speaker of the House Paul Ryan (R-WI) was some kind of ruthless woman-hater who was determined to force women to dress in some sort of Sharia-or-Handmaid's-Tale-esque restrictive dress code.

Of course, it was all a lie--the dress code didn't begin with Speaker Ryan, and was enforced by each Speaker of the House prior to him. Women were not permitted to wear sleeveless items of clothing or open-toed shoes. This is hardly a "draconian" dress code. Regardless, on Thursday, Ryan announced that the dress code would be "modernized."

Despite this, the Democrat women of the House of Representatives decided to stage a "protest" of their own, sporting sleeveless dresses and blouses.

Good job, congresswomen. Your bare arms really scared away all of those woman-haters determined to keep you down.

Of course, this is all just dumb, dumb, dumb, and compounded by former Speaker of the House Nancy Pelosi's (D-CA) tweet saying she was "glad to see" the code updated. (Why Pelosi didn't update this supposedly oppressive dress code during her time as speaker is anyone's guess.)

Glad to see @SpeakerRyan is updating the dress code for the House Floor. These unwritten rules are in desperate need of updates.

Glad they're focusing on the important things in Congress.