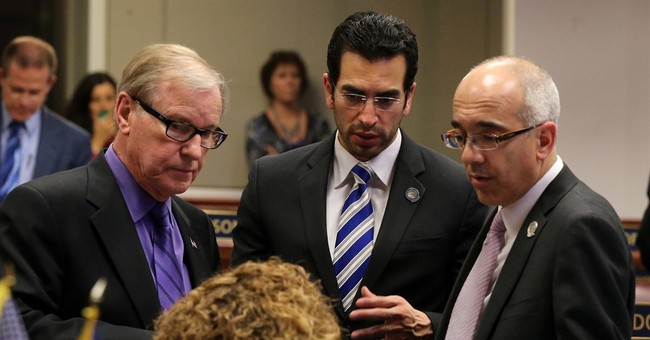 Rep. Ruben Kihuen (D-NV) allegedly sexually harassed his campaign's finance director until she quit her job, BuzzFeed News is reporting. The former finance director, who was identified only as Samantha, said that Kihuen repeatedly said he would like to take her on dates, implied they should spend the night together in a hotel, and touched her thighs on more than one occasion.

The events took place during the primary campaign. Kihuen was elected to Congress in 2016.

On Feb. 19, Samantha says she accompanied Kihuen to a meeting with Rep. Tony Cardenas at the Aria Hotel. Cardenas was in town to support presidential candidate Hillary Clinton ahead of the Nevada caucuses. Cardenas’ office confirmed that he and his wife stayed in the hotel that weekend. In the elevator on the way to the meeting, Samantha said Kihuen told her, “We should get a hotel room here.”

“I said ‘no’ very firmly and he just laughed at me. It was humiliating,” she told BuzzFeed News.

Kihuen drove on the way back from the meeting to their campaign office, with Samantha in the passenger seat. Samantha said Kihuen again asked if she’d ever cheated on her boyfriend, and started touching her thigh. She told him to stop, and said she said “no” and began talking about her boyfriend.

A separate time in March, Kihuen asked for help with something on the computer during “call time” — when a candidate makes fundraising calls — and Samantha alleges he grabbed the back of her thigh while she looked at the screen.

The DCCC chairman said that Kihuen should resign, as he does not believe that anyone guilty of this type of harassment should hold office.

DCCC Chairman Ben Ray Lujan: "If anyone is guilty of sexual harassment or sexual assault, they should not hold elected office. Congressman Kihuen should resign" https://t.co/JRK4zsqAnD

Kihuen issued an apology to Samantha, saying that she was a "valued member" of his campaign team. He did not deny any of her claims.

Chris Cuomo's Book Canceled by Publisher
Townhall
'Sir, do you even remember what my question was?' Prosecution just needs to sit back and let Jussie Smollett continue to bury himself
Twitchy
Latest Poll Numbers Spell Doom for Democrats — and Bust Some Narratives Along the Way
Redstate
The Beatles’ ‘Get Back’: The Long and Grinding Road
PJ Media