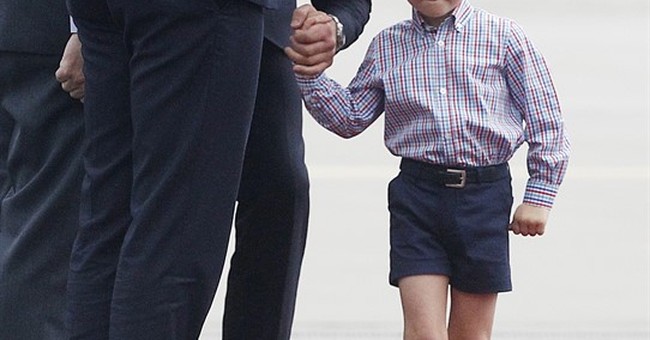 A prominent minister is catching heat after urging people to pray that Prince George, the 4-year-old son of Prince William and Catherine Middleton, grows up and falls in love with a man.

The Very Rev. Kelvin Holdsworth made the comments in a post on his blog. Holdsworth said that if Prince George were to be gay and sought to marry a man, this would change the current structure of the Church of England. Currently, the Church of England does not perform same-sex marriages, but they are legal in the United Kingdom.

An excerpt of the post, which is part of a larger piece titled "How to change the Church of England – quick recap."

If people don’t want to engage in campaigning in this way, they do in England have another unique option, which is to pray in the privacy of their hearts (or in public if they dare) for the Lord to bless Prince George with a love, when he grows up, of a fine young gentleman. A royal wedding might sort things out remarkably easily though we might have to wait 25 years for that to happen.

When Prince George eventually becomes king, he will also become the head of the Church of England.

Holdsworth's comments were decried by other members of the clergy, both for their utter strangeness as well as their "anti-constitutional" nature. As king, George will be expected to produce a biological heir to the throne, something that can't happen if he's married to a man.

According to a former Chaplain to the Queen, Holdsworth's prayer suggestion is undermining Prince George's role.

Gavin Ashenden, a former Chaplain to the Queen and missionary bishop in the Christian Episcopal Church, accused Holdsworth of praying the 'child out of the intentions of God'. He told Christian Today: 'To pray for Prince George to grow up in that way, particularly when part of the expectation is he will inherit is to produce a biological heir with a woman he loves, is to pray in a way that would disable and undermine his constitutional and personal role.

'It is an unkind and destabilising prayer. It is the theological equivalent of the curse of the wicked fairy in one of the fairy tales. It is un-Christian as well as being anti-constitutional. It is a very long way from being a blessing for Prince George.'

Monarchy aside, it just seems rather weird to pray for a kid who isn't even kindergarten age to fall in love with anybody, regardless of sex. The fact of the matter is that Prince George is hardly a typical child, and there are societal expectations that have been placed on him since his birth. Chief among these is the eventual production of an heir, which is kind of a big deal in British history. Using a small child to promote an agenda is not a good thing.