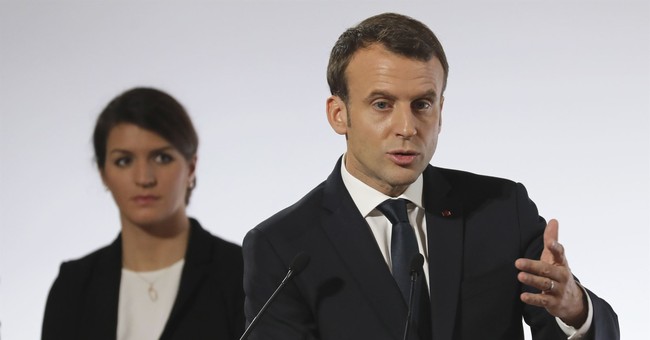 Marking the International Day for Elimination of Violence Against Women on Saturday, French President Emmanuel Macron proposed new policies that he's aiming to go into effect in 2018. Among these new ideas is that "gender-based insults" are now going to be "punishable by law." People who say these "gender-based insults" will face a fine.

"Let's seal a pact of equality between men and women," Macron said in a speech marking the International Day for Elimination of Violence Against Women.

About violence and sexual abuse, he said: "It is essential that shame changes camp."

"Gender-based insults will be punishable by law. Offenders will face a deterrent fine," he added.

Additionally, France is likely to (finally) set an age of consent. Macron believes that it should be 15 years of age, but other numbers, such as 13, have been proposed. Currently, there is no minimum age as to which a person cannot legally consent to sex. Other policies proposed include tweaking current statute of limitations laws, and allowing for people to report sexual assault online.

While these are mostly positive changes, it seems a bit silly to fine people for using "gender-based insults." The police should have more important things to deal with than to make sure that Jimmy isn't being rude to Susie. ("Sticks and stones," etc. etc.)

And, for instance: is Ham from "The Sandlot" now a criminal for this exchange?

Or, alternatively, would this clapping rhyme be worthy of a fine due to its characterization of men?

Violence against women is certainly a problem that needs to be addressed. But fining people for using "gender-based insults" doesn't seem like it'll accomplish much.