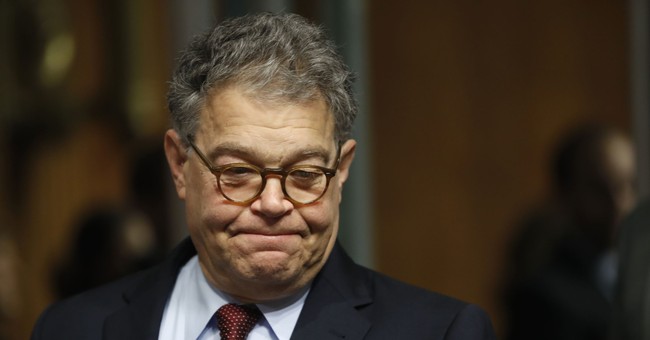 After his first attempt at an apology for groping a woman's breasts while she was asleep was ripped apart by just about everyone, Sen. Al Franken (D-MN) has issued a lengthier statement apologizing for his actions. Franken also called for an ethics investigation into his conduct and pledged to "gladly cooperate" with any investigation.

The full text of the statement:

“The first thing I want to do is apologize: to Leeann, to everyone else who was part of that tour, to everyone who has worked for me, to everyone I represent, and to everyone who counts on me to be an ally and supporter and champion of women. There’s more I want to say, but the first and most important thing—and if it’s the only thing you care to hear, that’s fine—is: I’m sorry.

“I respect women. I don’t respect men who don’t. And the fact that my own actions have given people a good reason to doubt that makes me feel ashamed.

“But I want to say something else, too. Over the last few months, all of us—including and especially men who respect women—have been forced to take a good, hard look at our own actions and think (perhaps, shamefully, for the first time) about how those actions have affected women.

“For instance, that picture. I don’t know what was in my head when I took that picture, and it doesn’t matter. There’s no excuse. I look at it now and I feel disgusted with myself. It isn’t funny. It’s completely inappropriate. It’s obvious how Leeann  would feel violated by that picture. And, what’s more, I can see how millions of other women would feel violated by it—women who have had similar experiences in their own lives, women who fear having those experiences, women who look up to me, women who have counted on me.

“Coming from the world of comedy, I’ve told and written a lot of jokes that I once thought were funny but later came to realize were just plain offensive. But the intentions behind my actions aren’t the point at all. It’s the impact these jokes and on others that matters. And I’m sorry it’s taken me so long to come to terms with that.

“While I don’t remember the rehearsal for the skit as Leeann does, I understand why we need to listen to and believe women’s experiences.

“I am asking that an ethics investigation be undertaken, and I will gladly cooperate.

I mean, this is certainly a little more heartfelt than "As to the photo [Of Al Franken grabbing the breasts of a sleeping woman with a big grin on his face], it was intended to be funny but wasn't," this is still questionable. It's also quite strange that Franken would say in one paragraph that women "deserve to be heard, and believed" yet also dispute Tweeden's story of Franken forcing his tongue into her mouth by saying "I don't remember the rehearsal for the skit as Leeann does." Tweeden is a woman, and according to Franken, women deserve to be both heard and believed. Which is it?

Recommended
What About Listening to the Science? States and Companies Won't Commit to CDC Guidelines Granting More Freedom
Rebecca Downs

Additionally, what on earth is an ethics investigation going to prove if Franken admits that he groped Tweeden while she was asleep? The investigation is basically laid out in the statement.