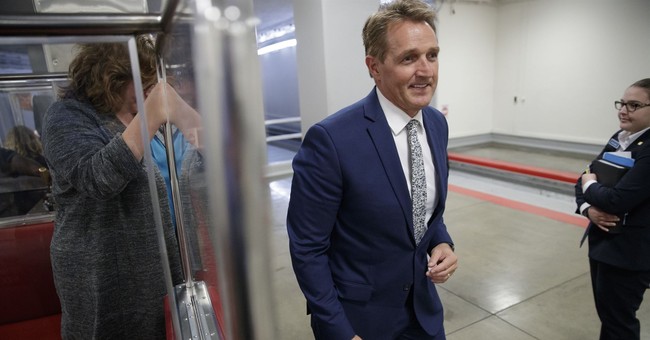 Outgoing Sen. Jeff Flake (R-AZ) made a peculiar announcement on Tuesday: He's working with Sen. Martin Heinrich (D-NM) to write a new law that would prohibit anyone who is convicted of domestic violence from buying a gun.

While this is a fantastic idea--it's...already a law. And has been, for quite a long time.

Donald Trump Jr. mocked Flake for being "proactive" by "creating" a law that has existed for decades.

Incredibly proactive considering that law has been on the books since the mid 90s. https://t.co/li2bSEW0LE

Flake seems to know this, but referred to a nonexistent "#DomesticViolenceLoophole" that was supposedly exploited by Sutherland Springs shooter Devin Patrick Kelley.

If being proactive means closing the #DomesticViolenceLoophole exploited by the #SutherlandSprings Texas shooter, you're right. https://t.co/8S89dgaTuK

The only "loophole" that occurred in the Sutherland Springs shooting was the fact that the Air Force neglected to submit Kelley's conviction to the national database. (This is, somehow, part of a wider trend.) This isn't a loophole, it's failing to enforce existing law. This should change, and nobody is arguing otherwise.

Loopholes should be closed, when they exist. They don't here.