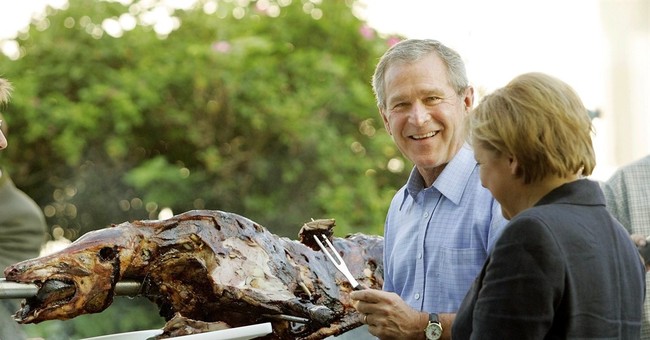 A new The Economist/YouGov Poll is lending credence to the saying "absence makes the heart grow fonder." According to the poll, Democrats now have a favorable view of...former President George W. Bush.

Among Republicans, a full 76 percent of people have a "very favorable" or "favorable" view on Bush. Independents were actually harder on Bush than Democrats, with only 42 having a favorable opinion.

It's slightly amusing to see how drastically people's opinions on Bush have changed since he's left office. It's fairly normal for presidents to experience a bit of a rose-colored glasses bump in popularity after the new president takes office, but given the vitriol associated with the Bush administration--especially from the left--this is all pretty remarkable.

It's reminiscent to how even figures like Nancy Pelosi are now pining for the good ol' days of Mitt Romney's campaign. At the time, Pelosi called Romney every name in the book, but now that Trump is in power, suddenly she's singing a very different tune.