More Than 300 Killed in Truck Bomb Attack in Somalia 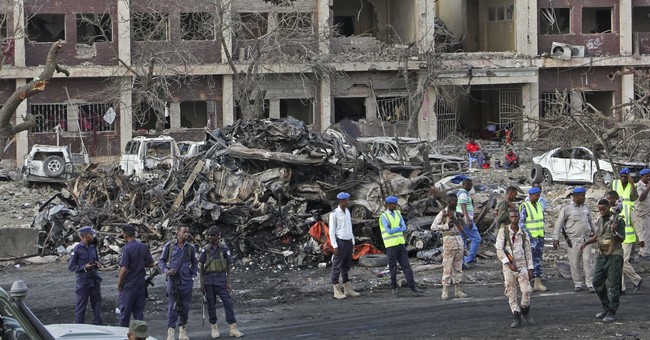 The death toll in Saturday's car bombing in Mogadishu, the capital of Somalia, has topped 300, with hundreds more injured. The attack was blamed on the group al-Shabaab, an Islamic jihadist militant organization in the country that is associated with al-Qaeda. This is one of the deadliest terror attacks in the region in years and is the worst-ever attack in Somalia.

The death toll is expected to rise in the coming days as people are still unaccounted for. Due to local burial customs and the sheer intensity of the blast incinerating people entirely, it may never be possible to accurately come up with a final tally.

Authorities say that the attack consisted of a truck that was packed with "several hundred kilograms of military-grade and homemade explosives," that was then detonated in front of a hotel near the country's foreign ministry. The truck sped through a checkpoint, crashed through a barrier, and then exploded. The explosion also hit a fuel tanker, which increased the devastation.

Aftermath of the massive truck bomb that struck Somalia, killing 270.

A tragedy completely ignored by Western media. And you know why... pic.twitter.com/hgw0ZTkWzd

Somalia's president has ordered three days of mourning throughout the country in response to the attack.

Many people have criticized the relative lack of media coverage and social media response to this massive terrorist attack.

'Why aren't we all with Somalia?'

Social media users have asked: Where is the collective outrage? https://t.co/c4wwfAf2L2 pic.twitter.com/2tCWw5d7qr

Toronto Mayor John Tory announced that the city will pay tribute to the victims of the attack by lighting the city's Toronto sign in the colors of the Somalian flag.

The Toronto sign will be lit in the colours of Somalia’s flag today in memory of the innocent victims of terrorism in Mogadishu. Our thoughts are with Somalia.