Green Bay Packers Asked Fans to Link Arms During Anthem; Most Did Not 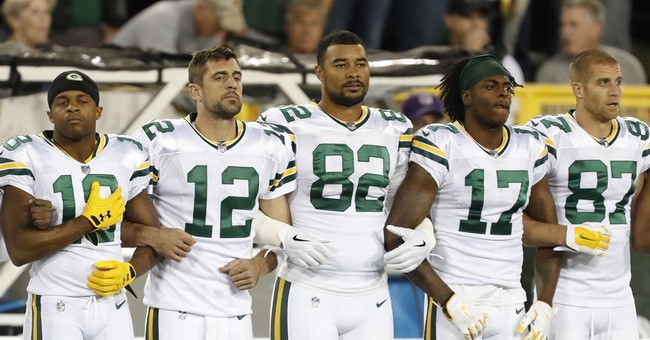 Last night, the Green Bay Packers linked arms as a team during the Star-Spangled Banner. Prior to the game, the team issued a statement saying that they hoped all of their fans would link arms as well. The Packers said that the image of people linking arms would be a "moment of unification" and would help to build a society that is "more fair and just."

Part of the statement:

This Thursday during the national anthem at Lambeau Field, Packers players, coaches and staff will join together with arms intertwined—connected like the threads on your favorite jersey. When we take this action, what you will see will be so much more than just a bunch of football players locking arms. The image you will see on September 28th will be one of unity. It will represent a coming together of players who want the same things that all of us do—freedom, equality, tolerance, understanding, and justice for those who have been unjustly treated, discriminated against or otherwise treated unfairly. You will see the sons of police officers, kids who grew up in military families, people who have themselves experienced injustice and discrimination firsthand, and an array of others all linking together in a display of unity.

Let’s work together to build a society that is more fair and just.

Join us this Thursday by locking arms with whoever you’re with, stranger or loved one, wherever you are—intertwined and included—in this moment of unification.

Unfortunately for the Packers, it doesn't look as though many of their fans complied. Instead, people chanted "U-S-A" before the anthem, and shots of the crowd showed very few people actually linking arms.  Most stood with their hands over their hearts.

The national anthem already is a symbol of unity. Looks as though most fans already agree.