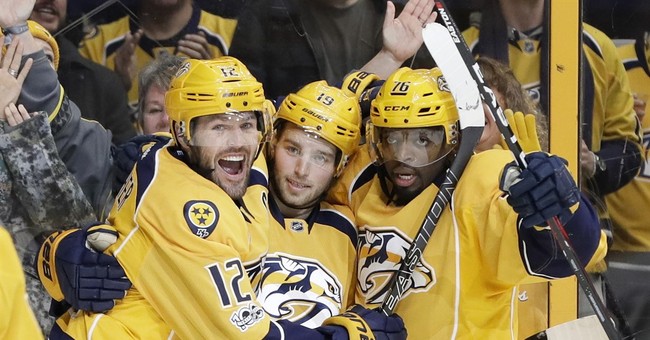 The Nashville Predators have no plans to partake in any sort of national anthem protest, Head Coach Peter Laviolette told the media. Laviolette said that his team met on Tuesday and decided that they will all stand for the Star-Spangled Banner out of respect for the military, the nation, and the anthem itself. Laviolette is from Massachusetts and is one of the winningest American-born coaches in NHL history. Four players currently at the Predators training camp are Americans.

Laviolette also stressed that while he understand that there's freedom of speech, he wants to use his platform and his team to "send positive messages."

“We met as a group (Tuesday), and our decision is we’re going to stand for the national anthem out of respect for the anthem, for our country, for the people who serve for our country," said Laviolette, a Massachusetts native. "That’s what we talked about, and that’s where we’re at.

"I also understand that there’s a freedom of speech. We totally respect that. Everybody has a different opinion. For us internally, if there’s anything that we can do to send positive messages throughout the country in any way, that would be a good thing.”

Asked how he would proceed if a player approached him about protesting, Laviolette declined to elaborate.

Laviolette's rhetoric was echoed by Predators' defenseman P.K. Subban. Subban, a native of Toronto born to Caribbean immigrants, is probably the highest-profile black NHL player and is one of the league's most popular players period. Speaking at a charity event in Nashville, Subban said he'd "never" kneel for the flag as he respects the United States and its flag.