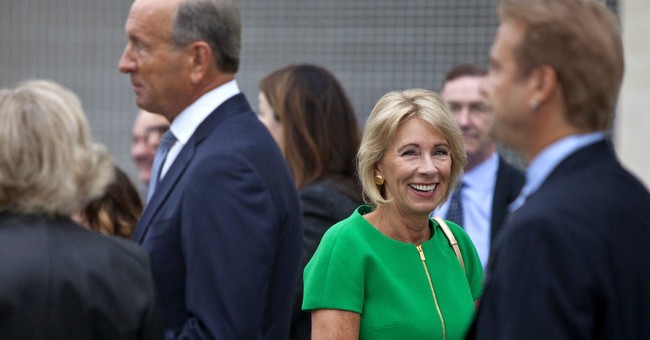 Secretary of Education Betsy DeVos has rescinded the "Dear Colleague" letter that advised colleges on how to investigate allegations of sexual assault on campus. The letter, which was issued in 2011, has since been replaced by a new interim policy.

The 2011 Dear Colleague Letter required schools to adopt a minimal standard of proof—the preponderance-of-the-evidence standard—in administering student discipline, even though many schools had traditionally employed a higher clear-and-convincing-evidence standard.  The Letter insisted that schools with an appeals process allow complainants to appeal not-guilty findings, even though many schools had previously followed procedures reserving appeal for accused students.  The Letter discouraged cross-examination by the parties, suggesting that to recognize a right to such cross-examination might violate Title IX.  The Letter forbade schools from relying on investigations of criminal conduct by law-enforcement authorities to resolve Title IX complaints, forcing schools to establish policing and judicial systems while at the same time directing schools to resolve complaints on an expedited basis.  The Letter provided that any due-process protections afforded to accused students should not “unnecessarily delay” resolving the charges against them.

Legal commentators have criticized the 2011 Letter and the 2014 Questions and Answers for placing “improper pressure upon universities to adopt procedures that do not afford fundamental fairness.”1 As a result, many schools have established procedures for resolving allegations that “lack the most basic elements of fairness and due process, are overwhelmingly stacked against the accused, and are in no way required by Title IX law or regulation.

Now, schools are advised to use the "clear and convincing" standard of evidence.

New guidance allows schools to use the clear & convincing standard of evidence pic.twitter.com/ouGkFKT6Dk

Former Vice President Joe Biden released a video on Tuesday in anticipation of the letter being revoked, saying that the fight to end rape culture is not over despite these new policies.

Obviously, nobody is a fan of sexual assault, on or off campus. Nobody wants there to be more rapes on campus. The 2011 letter was bad policy, and overstepped its bounds. The accused have rights in this country, like it or not--and there have been horrendous "kangaroo court" stories that have emerged as a result of these policies. Changes had to be made.

Share this on Facebook
Tweet
NYT Columnist's Op-Ed About Liz Cheney Shows How the Left Really Feels About Her...And It's Not Shocking
Matt Vespa
Guys, If Only Someone Made Ma'Khia Byrant a Sandwich, She Might Be Alive Right Now
Matt Vespa
Biden's Top DOJ Nominee Tries to Clean Up Her Support of the Jussie Smollett Hoax
Katie Pavlich
'No More Masks!': School Board Adjourns Early After Meeting Becomes Heated Over COVID Restrictions
Julio Rosas