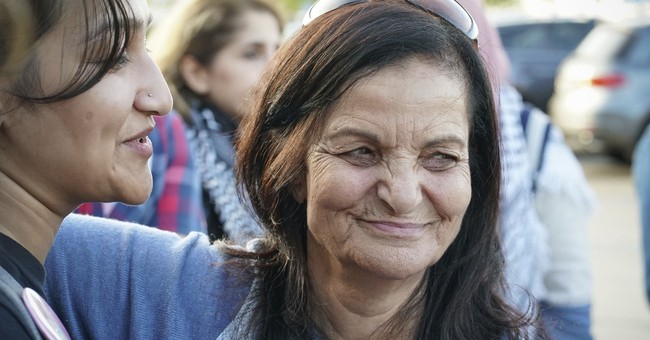 Convicted terrorist-turned-Women's March organizer Rasmea Odeh has been deported from the United States to Jordan after it was revealed that she lied on her application for a U.S. visa and for U.S. citizenship. Odeh did not state on her application that she was convicted in 1970 for two bombings in Jerusalem that resulted in the deaths of two people, and hence was tried for immigration fraud. After several appeals and a vacated sentence, on March 23, 2017 Odeh was sentenced to be deported and to be stripped of her U.S. citizenship. Her citizenship was formally revoked on August 17.

Despite the relatively open-and-shut nature of the case, Odeh still has supporters who protested her deportation using the hashtag #HonorRasmea.

Rasmea Odeh, we'll never forget you. Thank you for devoting your life to liberation of women, immigrants, and all of Palestine #HonorRasmea

Today, Rasmea Odeh is being forced to depart the US after an almost four-year legal and political struggle. We #HonorRasmea. @Justice4Rasmea pic.twitter.com/fqdsNAVWFX

WRL's 2017 Grace Paley Lifetime Achievement Awardee Rasmea Odeh was deported to Jordan this week. Our struggle is one struggle.#HonorRasmea pic.twitter.com/qk9XmLUA3R

And despite claiming to a Chicago newspaper that she has no friends or family in Jordan, this appears to be false.