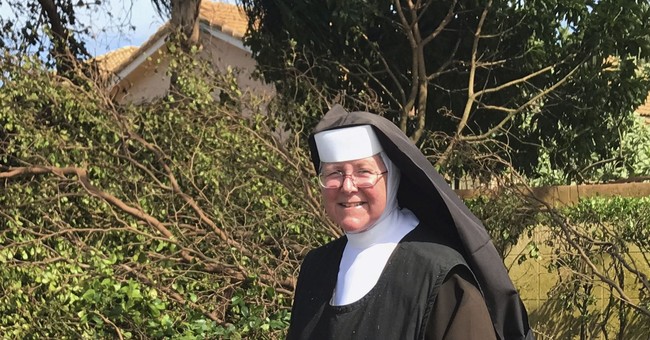 The internet is loving a short video of a nun clad in full habit with a chainsaw cutting up a tree that was felled during Hurricane Irma. Sister Margaret Ann, the principal of Archbishop Coleman F. Carroll High School in Miami, Florida, was spotted by an off-duty Miami-Dade police officer, who shared pictures and videos of the sister on Facebook and Twitter.

?? of Sister Margaret Ann in action. Thank you to all of our neighbors that are working together to get through this! We are #MiamiDadeStrong pic.twitter.com/5tG6nzk7Ye

Sister Margaret Ann said that the chainsaws were from a closet in her school, and she felt it was her duty to pitch in and help with the cleanup in whatever way she can.

"The road was blocked, we couldn't get through," Sister Margaret Ann told CNN. "And I saw somebody spin in the mud and almost go into a wall, going off the road. So, there was a need, I had the means — so I wanted to help out."

The chainsaws were sitting in a closet at her school, Sister Margaret Ann said, "and they didn't belong there. They needed to be used."

By using the chainsaw, the nun said, she was trying to live up to something her school teaches its students: "Do what you can to help."

While many people were amused by Sr. Margaret Ann, others said that a nun with a chainsaw was a manifestation of their worst childhood nightmares.

A nun with a chainsaw.
Welcome to my sixth grade nightmare. https://t.co/d0395JexBX

The phrase "chainsaw-wielding nun" is one we didn't know we would need to use in the wake of Irma. https://t.co/nmEkMsc56k

That's how you solve a problem like Maria. #chainsawnun pic.twitter.com/7Xe2X8Dal6

"Nun with a chainsaw"

To most who attended Catholic schools a nun with a chainsaw would have been our worst nightmare #WednesdayWisdom pic.twitter.com/kTahKiwxtC?? https://t.co/2Bs3OOcfzj

My worst nightmare from catholic school - a nun with a chainsaw. https://t.co/B5PM4XetvE