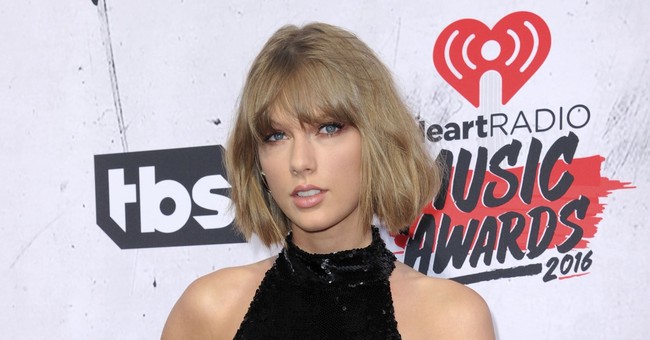 Unless you've been under a rock for the past week, you're likely aware that Taylor Swift emerged from her yearlong silence and released a new song and announced an album, titled "Reputation," to be released this November. While this author is personally a fan of "Look What You Made Me Do," and looks forward to buying the album come November, some people took an odd take on the album announcement: they demanded that the politically-inactive singer speak out and condemn President Donald Trump.

In a post that reads kind of hilariously following the record-breaking success of both the single and the accompanying music video, Katie Cunningham of Junkee says that for Swift to get her career back to what it was, she must "renounce Donald Trump."

So bad was the backlash to being exposed as a fraud that Swift spent the year more or less in hiding — her posts on social media were mostly limited to birthday wishes for her famous friends, she stopped attending high-profile events, she didn’t hold her annual Fourth of July party. Depending on how cooked you like your conspiracy theories, she even started leaving her New York apartment inside a box to avoid paparazzi. Her house of cards collapsed.

But Taylor Swift’s biggest problem isn’t Kim Kardashian or Kanye West. It’s not even Katy Perry. If Taylor Swift wants her career back, there’s one thing she has to do: renounce Donald Trump.

(Spoiler alert: her career appears to be fine.)

Amy Zimmerman from the Daily Beast had similar thoughts, and said that in order for people to "trust" Swift once again, she must denounce the president, even if it means "pissing off some of her fans."

Swift can complain about her mangled reputation all she wants, but the facts speak for themselves. The pop singer, while inarguably talented, often comes across as highly secretive at best and deceitful at worst. If Taylor Swift actually wants us to trust her, she could start by publicly announcing that she didn’t vote for Donald Trump—even if that means pissing off some of her fans. Until Swift is ready to let go of her perfectly controlled (albeit compromised) reputation, the pop star’s vision of glowing headlines and a fresh new start will stay a fantasy.

Hi, I'm Taylor Swift. You may know me from my being a feminist who has yet to speak out against Trump. Anyway, I have a new song out. Bye! pic.twitter.com/KKMsesZpKU

Is #LookWhatYouMadeMeDo about why Taylor Swift voted for Trump?

This is probably the sixth article in the past year I've seen angry that Taylor Swift isn't a vocal anti-Trump activist. https://t.co/52THfKhgUh

Friendly reminder that Taylor Swift is using her platform to denounce Kim Kardashian and Kanye West and not Donald Trump.

One small issue with demanding that Swift denounce Trump and/or say she didn't vote for him: there's a pretty good chance that Swift actually voted for him. This, of course doesn't actually matter in the grand scheme of things. Trump still won the presidency regardless of how Taylor Swift voted, and will still be president whether or not Swift weighs in about how she feels about him. Hillary Clinton lost the election, despite the massive amounts of star power backing her, so it's pretty clear celebrity endorsements meant basically nothing. It would not make a difference if Swift were to say something now about Trump or if she had said something on November 7--although as Katy Perry has learned in recent months, potentially alienating half of your fanbase by aligning with a polarizing politician is not a smart career move. Swift chose to stay silent, and society is better for it.

There'd be no career benefit for Swift to say anything--positive or negative--about Trump, and given that she's a woman who is primarily focused on building a successful entertainment career and keeping her (wild) fanbase happy, she's likely aware of this fact. The only people who would benefit from Swift saying something negative about Trump are people who already don't like him and who apparently need their political views validated by a 27-year-old who writes catchy songs about men she's dated. The career benefits simply aren't there, and again, it's not like Swift criticizing Trump would be the last straw that makes him resign from the White House.

Recommended
Well, That’s Not the Retirement Message Some Employees Were Expecting from a Diversity Consultant Firm
Matt Vespa

Taylor Swift doesn't have to do a thing about politics if she doesn't want to, and as of now, it seems as though she doesn't want to. Swift has spoken before that she prefers to keep quiet about politics because she wants her fans to make their own decisions, which is a smart move that I wish more artists would emulate. Her job is not to tell people how to think about the world, rather, her job is to entertain people and to write songs. She chooses to do just that. Whoever she voted for is nobody's business. In a healthy society, it would be refreshing if an artist went out of her way to just entertain rather than make everything political (looking at you, Katy Perry), but in today's world, having a private life is apparently a bad thing. This mentality needs to stop.

Maybe Taylor Swift voted for Hillary Clinton. Maybe she voted for Donald Trump. Maybe she wrote in her best friend's name. I don't care. Neither should anybody else.

Share this on Facebook
Tweet
It's Over: Senate Republicans Defeat Corrupt 'For the People Act'
Reagan McCarthy
Well, That’s Not the Retirement Message Some Employees Were Expecting from a Diversity Consultant Firm
Matt Vespa
Escape from New York: WSJ Hopes for City's Revival, But Zeroes in on the Candidate Who Must Lose At All Costs
Matt Vespa