Take a Look at These Incredible Pictures of Heroes in Houston 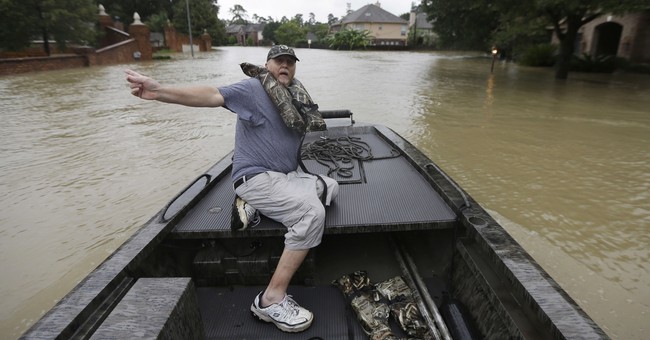 Over the weekend, Houston and parts of Texas faced unimaginable destruction and record-breaking flooding. There were hundreds of horrific images of an entire city underwater, but amid the damage came hope, in the form of ordinary people stepping up to save lives and help out their communities.

Our officers conducting rescue operations in our city around the clock. Please STAY OFF the roadways and help us by helping your neighbors. pic.twitter.com/xRTYiNvaRe

A man clinging to a street sign, stranded in the middle of dangerously high flood waters, gets an incredible rescue: https://t.co/O0kp2W0FQj pic.twitter.com/crl76RrO5O

Put your sound on for this one:

AMAZING RESCUE: A person was holding on to their car and trying to survive when two men saved him on the Katy Frwy https://t.co/pIUUByO9QM pic.twitter.com/42JevueFc3

Hit $500k within 24 hours.
I've raised the goal to $1 million.
Incredible to witness people coming together for the greater good of humanity pic.twitter.com/ZGllA96pwD

Many people took out their private boats to help rescue people:

...including the "Cajun Navy" from Lousiana.

The Cajun Navy is doing amazing things in the Houston areahttps://t.co/2pe2xymkPC pic.twitter.com/Zg872ASjwX

The damage done to the city will take years to recover from. But if this past weekend was any sort of sign, Houston is full of wonderful people who truly care for each other.

Get Ready for President Hillary Clinton
Townhall
Dr. Fauci responds to Rand Paul and Ted Cruz, says he shouldn't be prosecuted because 'I represent science'
Twitchy
Rand Paul Takes Fauci to the Cleaners and Hangs Him out to Dry
Redstate
Your Thanksgiving Weekend Round-up! Shoplifting, Black Supremacy and Antifa Weeps!
PJ Media