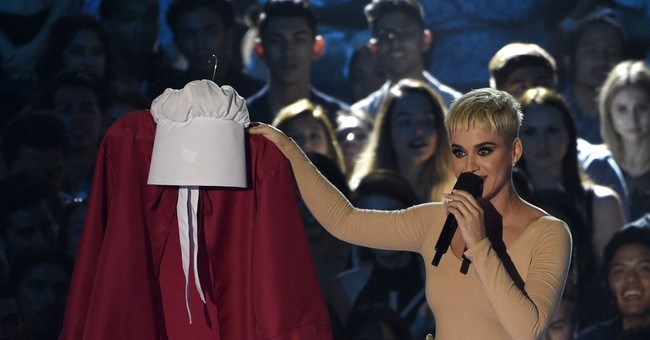 Sunday night was the MTV Video Music Awards (VMAs), and boy, they were a politically-charged event. Host Katy Perry pulled out a Handmaid's Tale outfit during her opening monologue about how the world is on fire, and presenter Paris Jackson (Michael Jackson's daughter) spoke about the need to "resist" and decried the recent racist protest in Charlottesville, Virginia. MTV invited transgender members of the military to the VMAs as well, in a show of support after Trump's recent reversal on transgender military policy.

Later on in the show, Perry made a joke about how it'd be important to prevent a Russian popstar from hijacking the "Best New Artist" vote, and made a comment about how when Hillary Clinton was elected president, she'd release an album people would like. (Perry's newest album tanked.)

But the most blatant anti-Trump commentary came from the show's producers themselves, who played the YG Song "FDT (F--k Donald Trump)" to the arena during a commercial break. While the song was not heard by television viewers, people who were present at the VMAs recorded the song and put videos on Twitter, Snapchat, and other social media platforms.

lol they playing fuck donald trump at the vmas pic.twitter.com/y3K24x1ggX

A song apparently called "Fuck Donald Trump" is playing during the commercial break at the VMAs. pic.twitter.com/u5drfEzwEh