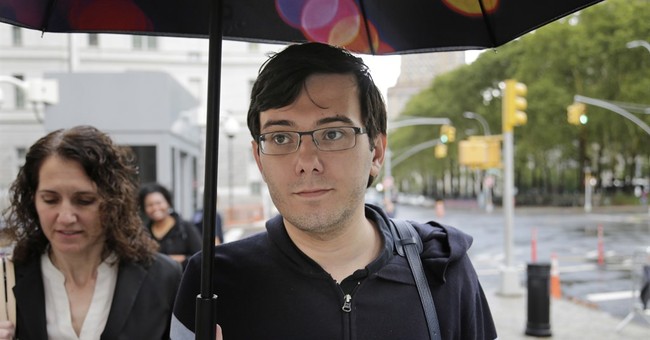 Martin Shkreli, the quasi-imfamous "pharma bro" has been found guilty of three federal counts of securities fraud and was found not guilty on five additional counts. Shkreli was arrested in December 2015 and his trial began about a month ago.

He faces up to 20 years in prison when he is sentenced.

Prosecutors said a mountain of testimony and evidence at trial showed that Shkreli duped multiple investors into putting millions of dollars into two hedge funds he ran, MSMB Capital and MSMB Healthcare, by falsely claiming to have an excellent record of running such funds, and by falsely stating his investment strategy had a low level of risk.

Normally, a securities fraud trial wouldn't merit this kind of interest, but Shkreli has been a notorious figure ever since he raised the price of a toxoplasmosis drug back in September 2015 from $13.50 a tablet to more than $700. Since then, he's become an eccentric supervillain of sorts, and, among other things, purchased the only copy in existence of the new Wu-Tang Clan album.  Shkreli also claimed to have unreleased music from bands such as The Beatles, Nirvana, and Brand New, but so far has not released anything.

Shkreli (sort-of) endorsed Trump during the 2016 election, but later clarified he would vote for him "with a gun to his head."