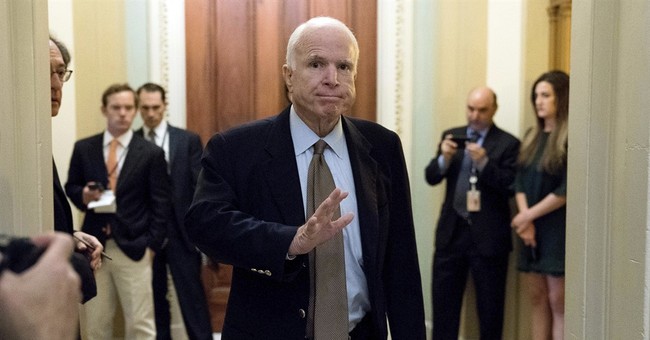 On Wednesday night, Sen. John McCain (R-AZ) announced that he had been diagnosed with glioblastoma, an aggressive form of brain cancer. Following this awful news, the well-wishes and prayers poured in from across the country, and on both sides of the aisle. Here are some notable messages.

Melania and I send our thoughts and prayers to Senator McCain, Cindy, and their entire family. Get well soon. https://t.co/fONWVlmYyz

Vice President Mike Pence and his wife Karen said they are praying for McCain and that "cancer picked the wrong guy."

Karen & I are praying for @SenJohnMcCain. Cancer picked on the wrong guy. John McCain is a fighter & he'll win this fight too. God bless!

Former President George H.W. Bush issued a statement from his summer house in Kennebunk, ME.

Former President Barack Obama, who defeated McCain in the 2008 election, said that McCain is an "American hero" and "one of the bravest fighters" he's ever met.

John McCain is an American hero & one of the bravest fighters I've ever known. Cancer doesn't know what it's up against. Give it hell, John.

Hillary Clinton said that McCain is "as tough as they come" and said that his family was in her thoughts.

John McCain is as tough as they come. Thinking of John, Cindy, their wonderful children, & their whole family tonight.

Former VP Joe Biden, who's son Beau passed away from a brain tumor in May of 2015, said that there has been "incredible progress in cancer research and treatment," within the last year, and said that "you can win this fight, John."

Incredible progress in cancer research and treatment in just the last year offers new promise and new hope. You can win this fight, John.

Sen. Ben Sasse (R-NE) said he looked forward to seeing him back in the Senate.

John McCain is an American hero and a relentless fighter. I wish him Godspeed in this fight and look fwd to welcoming him back to work soon.

Fellow Arizonan Sen. Jeff Flake (R-AZ) said that while the diagnosis was "tough," McCain is tougher.

Just spoke to @SenJohnMcCain. Tough diagnosis, but even tougher man.

Sen. Chuck Schumer (D-NY) said that he'll be keeping McCain in his prayers.

.@SenJohnMcCain, you are a true fighter & I'll be praying for you until you beat this. I know you will.