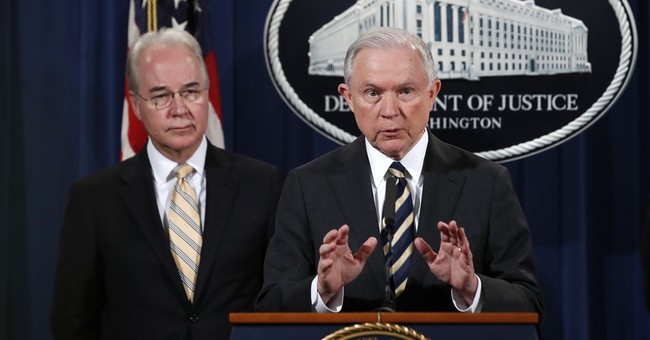 Attorney General Jeff Sessions has a curious idea to combat America's rising drug problems: revive the D.A.R.E. program. Speaking at the D.A.R.E. training conference, Sessions said that people are "ready to hear" D.A.R.E.'s message again, and that “We know it worked before and we can make it work again."

“D.A.R.E. is, I think, as I indicated, the best remembered anti-drug program today,” Sessions said. “In recent years, people have not paid much attention to that message, but they are ready to hear it again.”

“We know it worked before and we can make it work again,” the AG continued saying about the program, which was founded in Los Angeles in 1983. (NYDN)

To be blunt: D.A.R.E. is a terrible program and there's absolutely no reason to waste any more money on a flawed program that multiple studies have shown not only does not work, but also may have the reverse effect and result in more kids doing drugs and drinking alcohol. It doesn't deter drug use or teach kids effective ways to say no. D.A.R.E. itself has even admitted that their past programs were completely ineffective, and has attempted to reform their teaching style so it's less hysterical and hyperbolic.

Kids aren't stupid--they can see that what their friendly D.A.R.E. officer is describing isn't actually happening in real life, nor is the average fifth grader being offered drugs by the (bizarrely friendly) neighborhood drug dealer. For instance, former Presidents Bill Clinton, George W. Bush, and Barack Obama have all used illegal drugs in the past, and their past drug use clearly didn't "ruin their life" and destroy their careers, as D.A.R.E. students are taught to parrot in various essay contests.

Do these people mean well? Probably, but that still doesn't change the fact that this program is a waste of time and money. Then again, considering that Sessions is the same person who said that marijuana is only "slightly less awful" than heroin, it's really not all that shocking that he'd be a big fan of a program that looks good on paper, but doesn't jive with reality.

Should kids be encouraged to use drugs? Absolutely not, and I don't think anyone would ever advocate for that. There has to be a better way to teach kids about the dangers of drugs than D.A.R.E.--it's not the '80s any longer. The opioid epidemic is a serious issue, and wasting money on teaching fifth graders to "use the cold shoulder" or say how they're "cooler than drugs" isn't going to solve anything. Nobody wakes up in the morning and wants to be a heroin or pill addict.

In closing, I'll leave you with this, from former Rep. Trey Radel (R-FL), who resigned from Congress after being caught with cocaine:

We had DARE at my school. Nuff said. https://t.co/VQmPPRevQ7

Jokes aside, Radel then backed that up with how his father, a funeral director, sees young people dying from heroin overdoses at least once a week--further illustrating how D.A.R.E. is a failing program.