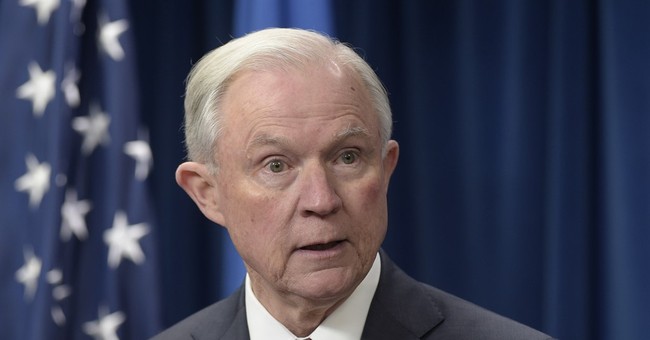 Attorney General Jeff Sessions, speaking to a group of law enforcement officials in Richmond, made the curious claim that marijuana is "only slightly less awful" than the heroin crisis that is currently plaguing the United States. After making several very good points regarding the source of the opiates and the need to secure the border, he then veered off into reefer-madness territory and said that marijuana should not be made legal in the United States, because it really isn't that much better than heroin.

I realize this may be an unfashionable belief in a time of growing tolerance of drug use. But too many lives are at stake to worry about being fashionable. I reject the idea that America will be a better place if marijuana is sold in every corner store. And I am astonished to hear people suggest that we can solve our heroin crisis by legalizing marijuana – so people can trade one life-wrecking dependency for another that’s only slightly less awful. Our nation needs to say clearly once again that using drugs will destroy your life.

First: Drugs are bad, and, much like with alcohol, a person probably shouldn't partake in them on a daily basis to a point of dependency.

Second: To deny that there's a spectrum of "badness" among drugs is absolute lunacy. I would 4000 percent rather see a person smoke marijuana rather than shoot up heroin or abuse painkillers. Marijuana isn't killing people. I know plenty of people who smoke marijuana. None of them are dead because of it. I can't say the same about people I know who have abused painkillers or opiates.

Third: There are a host of studies that say that states with medical marijuana and other expanded access to marijuana saw fewer opiate deaths and fewer opiate prescriptions. These are both good things. A large percentage of opiate addicts become addicted after being prescribed painkillers for chronic pain, something that medical marijuana is used to treat. Having marijuana sold in every corner store may very well see fewer people dead in bathrooms from opiate overdoses, which one would assume would be Sessions' desired goal.

Fourth: Marijuana legalization has been done in both red states and blue states, and is largely becoming a nonpartisan issue. More than half of Americans admit to having tried marijuana at some point--and, come on, half of Americans' lives aren't "ruined" for doing so.

The concern-troll, D.A.R.E.-esque rhetoric from Sessions needs to go if he wants to be taken seriously. It's a shame, because he made several good points in his speech--but all that anyone is focusing on is how he sounds like a bad after-school special.