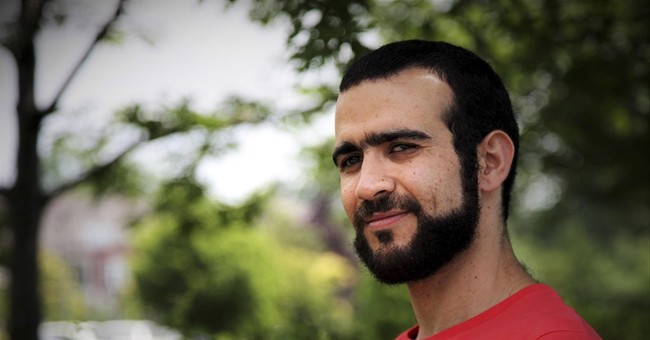 Matt wrote on Wednesday about how Canada was poised to give Omar Khadr, a convicted terrorist, a pretty hefty settlement for his time in Guantanamo Bay. Now, the official apology received by Khadr from the Canadian government has been released, and boy, is it a doozy.

"On behalf of the Government of Canada, we wish to apologize to Mr. Khadr for any role Canadian officials may have played in relation to his ordeal abroad and any resulting harm.

We hope that this expression, and the negotiated settlement reached with the Government, will assist him in his efforts to begin a new and hopeful chapter in his life with his fellow Canadians."

Khadr was captured by U.S. troops in Pakistan in 2002, when he was just 15. He was accused of throwing a grenade that killed an American soldier, U.S. Army Sgt. First Class Christopher Speer. Another soldier was partially blinded by the blast. He plead guilty in 2010, and was sentenced to eight years in prison plus time served. Eventually, he was extradited to Canada, where he was released in 2015. Khadr claims that his guilty plea was made under duress. In 2013, he filed a civil suit against the Canadian government.

Andrew Scheer, leader of Canada's Conservative Party, said that the settlement and apology was a "slap in the face" to Canadian soldiers. Scheer believes that the repatriation to Canada was enough.

Conservative Leader Andrew Scheer said it was "disgusting" for the government to concoct a "secret deal" and hand over millions to a convicted terrorist. "This payout is a slap in the face to men and women in uniform who face incredible danger every day to keep us safe."

Scheer said he believes the Harper government's decision to repatriate Khadr in 2012 was a sufficient response to the Supreme Court's ruling that Khadr's rights were violated. "The fact that [Khadr] is in Canada today is the remedy, that is the compensation," he said. "I would have refused to agree to this settlement."